Their President Josep Maria Bartomeu backed Valverde to continue for the final year of his contract. 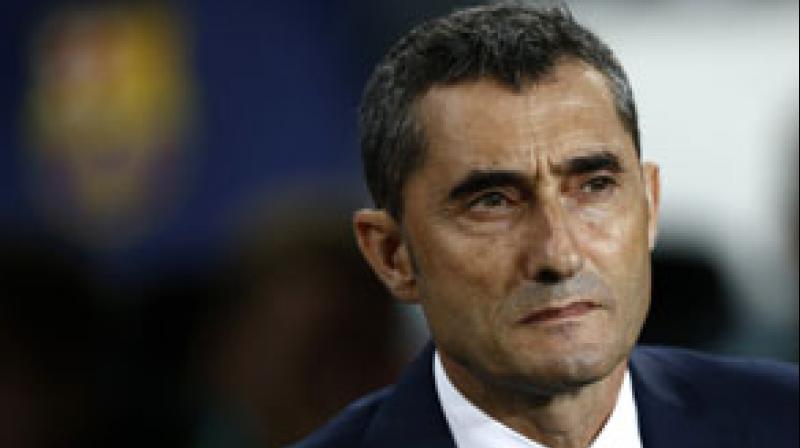 Stinging from their humiliating 4-0 loss to Liverpool in the Champions League semi-final second leg, Barca were bidding to win the Cup for the fifth year in a row but defeat by Valencia raised more doubts about Valverde’s future. (Photo: AP)

Sevilla: Barcelona coach Ernesto Valverde believes he can continue in charge of the Spanish champions despite losing the Copa del Rey final 2-1 to Valencia on Saturday to complete a miserable end to the season.

Stinging from their humiliating 4-0 loss to Liverpool in the Champions League semi-final second leg, Barca were bidding to win the Cup for the fifth year in a row but defeat by Valencia raised more doubts about Valverde’s future.

“I feel good (to continue), I know that to lose at this club is tough for the coach because there is always that responsibility, and sometimes you make mistakes, but you have to face them and here I am,” Valverde told reporters.

“A month ago we celebrated the La Liga title thinking about winning a treble and we’ve been knocked off that path at the decisive moment.”

Barcelona had been hoping to add to their 2009 and 2015 trebles and after throwing away a 3-0 first-leg lead against Liverpool, the Cup final offered the chance to seal a ninth domestic double.

“We haven’t lost because we were affected by the talk of a treble,” Valverde said. “You always work towards what the club requires, which is to win trophies.”

Kevin Gameiro and Rodrigo Moreno’s goals were enough for Valencia to celebrate their centenary year with a first major trophy since 2008, with Lionel Messi’s late strike proving to be a mere consolation for Barca.

Their President Josep Maria Bartomeu backed Valverde to continue for the final year of his contract.

“Valverde has a contract, he’s the coach. This defeat is not the manager’s fault,” Bartomeu said.

“We had a lot of chances but the ball wouldn’t go in. Sometimes you have all the shots, but what counts is scoring goals.

“I wouldn’t say the season’s been a failure but it’s not been excellent either. Each year we want to get to the run-in with the best chance of winning everything and in the end we’ve lost two games, Anfield and here, and missed out on two titles.”