Sports   Football  26 Apr 2019  'You can't guarantee anything in football but I think Paul will stay': Solskjaer
Sports, Football

'You can't guarantee anything in football but I think Paul will stay': Solskjaer

Pogba fuelled speculation linking him with a move to Real Madrid last month, suggesting Real were 'a dream club for any player.' 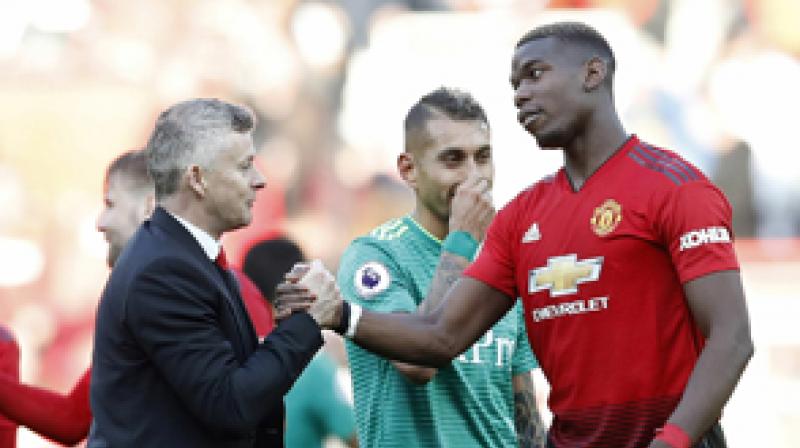 Pogba scored eight goals and provided five assists in his first 10 games following Solskjaer's appointment but his performances have tailed off since, and it was a surprise to many observers that the French midfielder was named in the Professional Footballers' Association's team of the year on Thursday. (Photo: AP)

Manchester: Ole Gunnar Solskjaer is confident that Paul Pogba will still be at Manchester United next season but admits he cannot guarantee the French World Cup winner will stay.

Pogba fuelled speculation linking him with a move to Real Madrid last month, suggesting Real were "a dream club for any player", although he declared at the time he was happy at Old Trafford.

Both manager Solskjaer and United's board want their 89 million (USD 115 million) club-record signing to stay, although they have acknowledged that circumstances could change. "You can't guarantee anything in football but yes I think Paul is going to be here," Solskjaer told reporters on Friday. "I can assure you that he is very determined to be successful at United."

Pogba scored eight goals and provided five assists in his first 10 games following Solskjaer's appointment but his performances have tailed off since, and it was a surprise to many observers that the French midfielder was named in the Professional Footballers' Association's team of the year on Thursday.

Former Manchester United midfielder Roy Keane this week described Pogba as a "big problem" for the club, suggesting that he was not committed enough to the team. But Solskjaer said Pogba can cope with the scrutiny. "That's just the standards he sets, because when he's creating chances, scoring goals, doing loads of work... that's just media, supporters, everyone looks to Paul. 'Could you have done better?"

"He's done fantastic for us, he's a human being as well and we're all the same, we want him to do well. "He's a leader in that dressing room and on the pitch for us. Back to if I can guarantee, I would say 'yes, I can guarantee' but in life you can never (know), but he will be here as far as I'm concerned." Solskjaer, who won 14 of his first 17 matches after replacing Jose Mourinho, initially as caretaker manager, in December, is attempting to turn around an awful run of form, which has seen United's players widely criticised.

United collapse
United have gone into freefall, losing seven of their past nine matches, a run that has seen them eliminated from both the Champions League and the FA Cup, and has significantly harmed their chances of finishing in the top four.

United are sixth in the Premier League, three points behind fourth-placed Chelsea, who visit Old Trafford on Sunday. Solskjaer has promised to stick by Manchester United goalkeeper David de Gea for the Chelsea match despite a recent loss of form.

De Gea has faced criticism after making a number of high-profile errors in recent matches, leading to goals in matches against Arsenal, Barcelona, Everton and Manchester City. The Spain international has not kept a clean sheet in his past 12 matches, and is the first United goalkeeper to concede 50 league goals in a season for 40 years.

Former United goalkeeper Gary Bailey suggested this week that the time is right to rest De Gea, but Solskjaer says he has no intention of doing that. He said: "No, not at all. I trust David and he's for me been the best player United have had for the last six or seven years.

"He's been absolutely outstanding and going through tough patches is part of a footballer's career. David will be fine." Solskjaer has also rejected suggestions that De Gea's contract situation is partly to blame for the dip in form.

The goalkeeper is out of contract in 2020, and there has been reported interest from Paris Saint-Germain. But Solskjaer said: "That's something you have to deal with as a footballer. It's a situation. David's coming in every single day doing what he should be doing."