Ronaldo pulled up after sprinting for the ball and appeared to be in some discomfort as he pointed towards his right hamstring. 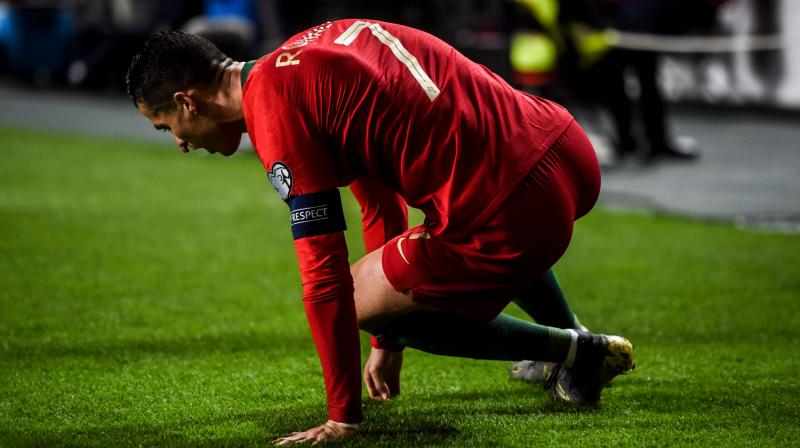 Serbia have one point from one match and Lithuania have none after their shock 2-1 defeat in Luxembourg on Friday. (Photo: AFP)

Lisbon: Wasteful Portugal were held to a 1-1 home draw by Serbia after their captain and top scorer Cristiano Ronaldo limped off with an apparent hamstring injury in the first half of their Euro 2020 Group B qualifier on Monday.

Dusan Tadic fired Serbia ahead with a seventh-minute penalty before Ronaldo was replaced by Pizzi on the half-hour and centre back Danilo equalised for the European champions with a spectacular long-range effort in the 42nd.

In the group’s other fixture, Ukraine came from behind to win 2-1 in Luxembourg, who suffered heartbreak with a late own goal by Gerson Rodrigues, and go top with four points from two games. Luxembourg stay on three points and Portugal are on two.

Serbia have one point from one match and Lithuania have none after their shock 2-1 defeat in Luxembourg on Friday.

Having been held to a 0-0 home stalemate by Ukraine on Friday, Portugal were under pressure to deliver but fell behind after their goalkeeper Rui Patricio clattered into Mijat Gacinovic and Tadic converted the spot kick.

Ronaldo pulled up after sprinting for the ball and appeared to be in some discomfort as he pointed towards his right hamstring while he received treatment near the corner flag before signalling to come off.

Serbia keeper Marko Dmitrovic produced a string of superb saves before Danilo levelled with a thunderbolt from 25 metres, which cannoned into the net off the underside of the bar, after a darting run through the middle from the halfway line.

Portugal were also guilty of some poor finishing in the first half as William Carvalho fired wide from five metres in the fourth minute, with the visitors on the back foot throughout the opening 45 minutes.

Adem Ljajic blazed a shot over the bar for Serbia in the 56th minute before visiting defender Uros Spajic cleared a close-range Pizzi shot off the line as Portugal threw men forward in the closing stages.

Some desperate defending by Serbia kept Portugal at bay in the dying minutes and Raphael Guerreiro missed the home side’s final chance in stoppage time when he hit the side netting with a fierce shot from inside the penalty area.

Luxembourg looked like earning a second straight upset when David Turpel fired them ahead in the 34th but Viktor Tsygankov equalised just before the break and Rodrigues then netted an own goal three minutes into added time to hand Ukraine the points.