Kylian Mbappe scored one and set up two more as France routed Iceland 4-0 to move to the top of Group H in Euro 2020 qualifying. 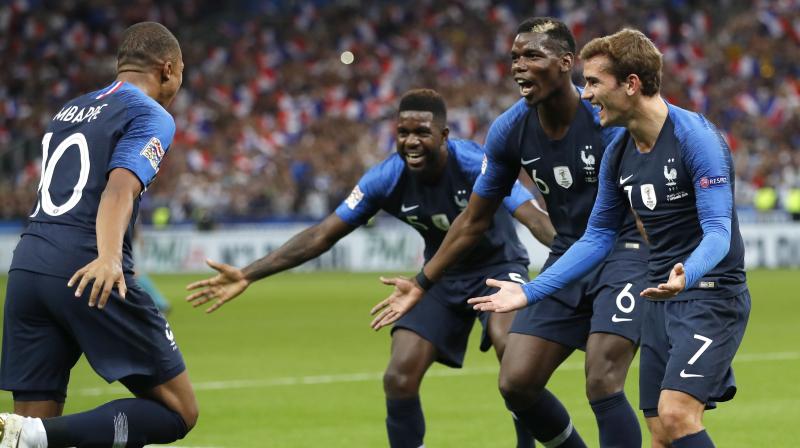 The result gives France six points from their first two matches and puts them ahead Turkey, who also won 4-0 on Monday, on goal difference. (Photo: AP)

Paris: Kylian Mbappe scored one and set up two more as France routed Iceland 4-0 at the Stade de France on Monday night to move to the top of Group H in Euro 2020 qualifying.

The result gives France six points from their first two matches and puts them ahead Turkey, who also won 4-0 on Monday, on goal difference.

"It was our objective to take six points but the manner was good as well," France manager Didier Deschamps told the post-match press conference.

"When the opponent plays very defensively it can be very difficult to find a way through so that was a good sign," said Deschamps, although he acknowledged that Icelandic fatigue near the end played a role.

He added that he was pleased that all three strikers - Mbappe, Antoine Griezmann and Olivier Giroud - scored.

"They are the champions of the world and you saw that today," acknowledged Iceland manager Erik Hamren.

From the start Mbappe's movement mesmerised the Icelanders, though his contribution to the opening goal after 11 minutes was straightforward.

The visitors cleared a corner only as far as Benjamin Pavard. The right back switched the ball to Mbappe, alone on the left. The young star had time to aim his cross which Samuel Umititi met at the near post with a header that glanced off the inside of the far post and into the goal.

Four minutes later, Giroud almost headed another, from a cross by Pavard, but Hannes Halldorsson leapt and stretched to palm the ball over.

For the next 45 minutes, France, who has never lost to Iceland, gave the impression that they had slipped down a couple of gears and were content to take the long-range shooting opportunities the packed Iceland defence was allowing.

After 68 minutes, Iceland was again punished for failing to put distance on a clearance.

France moved the ball to Pavard who swerved a cross in from the right that lured Halldorsson into a desperate dive for a ball he could not reach.

Giroud kneed the ball into the empty net for his 35th France goal. That moved him into third on the all-time list of France scorers, breaking a tie with David Trezeguet. The Chelsea striker trails only Michel Platini, on 41, and Thierry Henry, the all-time leader on 51.

"He's not playing much for his club," said Deschamps. "But he remains effective and brings something different to the other two strikers." Gaps began to appear in the Iceland defence.

Mbappe added a third after 78 minutes. Griezmann slipped a pass between two defenders to the advancing Mbappe who shrugged off a timid challenge and slid the ball past Halldorson.

Six minutes later, Mbappe returned the assist with a neat backheel that sent Griezmann scampering through the frozen Icelandic backline to poke the ball into the corner of the goal.

"We knew what we were up against. They are a team that doesn't let in a lot of goals  but today we did our job."

Pogba warned that the world champions are improving: "I think that we've made progress. We gained experience with the World Cup."

The defeat continued a miserable run for Iceland whose victory in Andorra on Friday was their only victory in a competitive match since November 2017.

France's next game is away to Turkey on June 8. On the same evening Iceland host Albania.

"We're not yet qualified and the next game against our friends the Turks will be hot," Deschamps warned.