Three-time runners-up Netherlands slumped to a shock 2-0 defeat to Bulgaria. 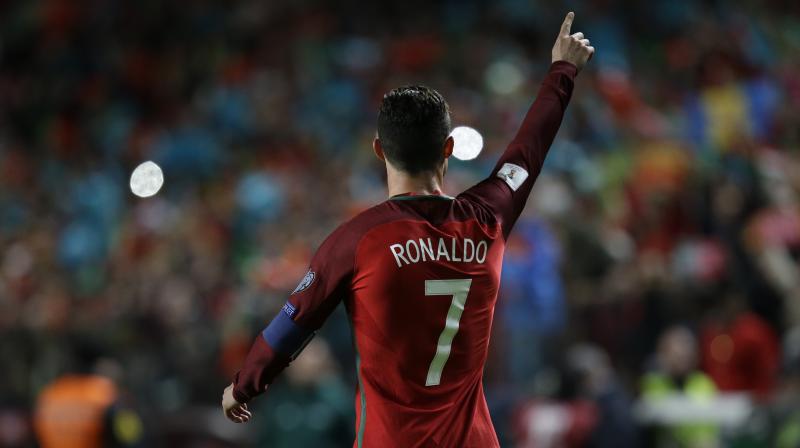 Cristiano Ronaldo took his international tally to 70 goals as European champions Portugal beat Hungary 3-0 to stay in second spot behind Switzerland in Group B. (Photo: AP)

Paris: The Netherlands' hopes of reaching the World Cup finals suffered a major setback on Saturday when the three-time runners-up slumped to a shock 2-0 defeat to Bulgaria.

The loss left the Dutch six points behind Group A leaders France, who beat Luxembourg 3-1, and down in fourth spot, three back from Sweden and two off Bulgaria with just the group winners guaranteed a place in the 2018 finals in Russia.

"What can I tell you? We came here with good intentions, but it has become a nightmare," Dutch skipper Arjen Robben said.

Elsewhere, Cristiano Ronaldo took his international tally to 70 goals as European champions Portugal beat Hungary 3-0 to stay in second spot behind Switzerland in Group B.

Belgium needed a goal two minutes from time by Romelu Lukaku to salvage a 1-1 draw against nine-man Greece as they stayed two points clear in Group H, although Roberto Martinez's team lost their 100 percent record in the process.

In Sofia, Bulgaria stunned the Dutch with two goals in the first 20 minutes, both coming from Spas Delev.

Delev pounced on a mistake by 17-year-old Matthijs De Ligt, Holland's youngest debutant since 1931, who misjudged a pass and allowed the striker to slot the ball past Jeroen Zoet.

Delev then made it 2-0 when he unleashed a stinging right-foot drive past Zoet.

The Dutch dominated large parts of the rest of the game but were thwarted by a solid Bulgarian defence while goalkeeper Nikolay Mihaylov pulled off a super save in the second period to deny Davy Klaassen.

Luxembourg levelled after 34 minutes thanks to Aurelien Joachim's penalty, his country's first goal against France in 39 years.

Arsenal star Giroud scored his second of the evening after 77 minutes after being set up by Benjamin Mendy.

"With us, Olivier often scores goals even if he is having a difficult time with his club. We gave him the crosses and he was very efficient," said France coach Didier Deschamps.

In Lisbon, Portugal saw off Hungary, a team they shared six goals with at Euro 2016.

The win kept Portugal in second place in Group B, three points behind Switzerland, who earlier preserved their 100 percent record with a fifth win in five games, a 1-0 home victory against Latvia.

Porto striker Andre Silva opened the scoring after 30 minutes, converting a pass from Raphael Guerreiro for his fifth goal in six games for Portugal.

Six minutes later, skipper Ronaldo doubled the lead with a superb left-footed finish and the Real Madrid superstar made it 3-0 on 65 minutes with a clever free-kick for his 70th international goal.

"We want to go the World Cup so we have to win our next five matches, they are all finals," said Portugal coach Fernando Santos.

Belgium stayed top of Group H but only after struggling to a 1-1 draw with Greece.

Missing the injured Eden Hazard, Belgium lacked a creative spark in Brussels and they were made to pay when Greece grabbed the lead just 20 seconds into the second period when Benfica striker Kostas Mitroglou latched on to a long ball to fire home his third goal of the qualifying campaign.

Greece were reduced to 10 men after 65 minutes when Panagiotis Tachtsidis was red carded for a crude lunge on defender Toby Alderweireld.

Everton striker Lukaku drove home from close range in the 89th minute to grab a share of the spoils before Georgios Tzavelas was sent-off in injury time.

"I feel a lot of frustration. With the amount of individual talent we have at our disposal, we have to show more," said Martinez.

Earlier on Saturday, Sweden crushed Belarus 4-0 to move to 10 points in Group A, three behind France, with Emil Forsberg scoring twice.

In Group H, Bosnia-Herzegovina also went on a goal spree with a 5-0 win over minnows Gibraltar, who have now conceded 22 goals in five games.