More than the action on field, or the lack of it, it was the largely empty Jawaharlal Nehru Stadium here that screamed aloud. 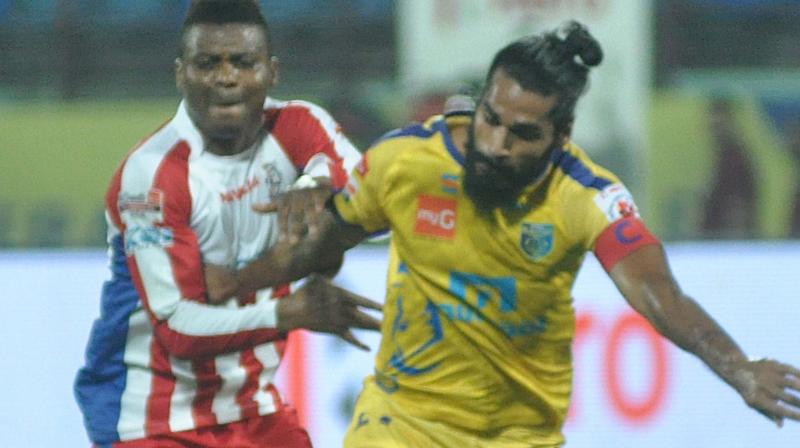 Action from the ISL match between Kerala Blasters and ATK in Kochi. (Photo: Sunoj Ninan Mathew)

Kochi: A pair of late goals, both scored by ATK, but one of which was recorded in Kerala Blasters’ column as an own goal, settled a listless game of football that resumed the Indian Super League campaign after the winter break here on Friday.

Edu Garcia, on his maiden start for ATK since signing from Bengaluru, scored in the 85th minute from a smart freekick that kept low and hit a corner of the net while Kerala drew level three minutes later after Gerson Vieira inadvertently turned in a Poplatnik header, to make it 1-1.

More than the action on field, or the lack of it, it was the largely empty Jawaharlal Nehru Stadium here that screamed aloud.

For Kerala, convincing their dissenting fans to return for the homes matches is equally challenging, if not far more compounding than trying to salvage the season as they remain eighth in the table and appear farther from the semifinals than before.

For a third game, since early December, Kerala fans continued their boycott (in the wake of poor results) and for the first time ever at the venue the organisers kept the attendance figures a secret. Visibly, it was far fewer than 8500 that was recorded here in a 1-0 defeat to Pune City on December 7.

While new Kerala head coach Nelo Vingada’s appeal to the fans clearly went unheard his players were desperate to impress, attempting to unlock the opposition’s often pragmatic approach. They however lacked the conviction to convert any of the numerous opportunities that were manufactured, mostly from open play.

Vingada had packed enough ammunition upfront by fielding both Slavisa Stojanovic and Matej Poplatnik and the former had as many as four goal-scoring chances – a glancing header in the first half and a shot that was skied from inside the box, on the hour mark, included.

Profligacy was the order of the day for the team in yellow and until Vieira’s own goal, Kerala had missed a plethora of chances. Len Doungel even hit the side-netting from a free header near post.