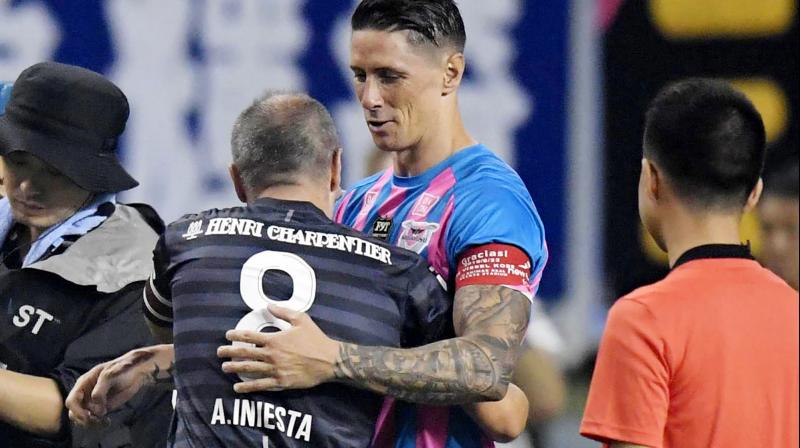 The 35-year-old Spanish footballer decided to bring down the curtain on his distinguished career on Friday. (Photo: AP)

Mumbai: Andres Iniesta penned a very emotional farewell message to Fernando Torres before he played the final match of his professional career. Torres’ team Sagan Tosu faced Iniesta’s Vissel Kobe for his last match. But Torres’ last match was not his best, as his team fell to a 6-1 drubbing. Iniesta too scored for Vissel Kobe.

The 35-year-old Spanish footballer decided to bring down the curtain on his distinguished career on Friday. His ex-teammate, David Villa, too, was a part of his last match. Villa came in as a substitute in the second half for Vissel Kobe. Torres, Iniesta and Villa were part of Spain’s World Cup-winning squad back in 2010.

Iniesta had expressed his feelings for Torres in a letter he wrote in his El Mundo column.

His letter read, “How weird. Don't tell me no, Fernando. It's very strange, I would say beautifully strange. Here we both are, about to play your last game as a professional. I still have time left. Here we are. On the other side of the world. It is as if life, capricious as it is, had brought us to Japan to say goodbye.”

“Football joined us more than 20 years ago when we were children. Well, you will be forever El Niño. And it will never separate us. We met when we had utopian dreams. That goal that gave us the European U16  Championship in England. I will never forget the gesture of you dedicating the win to me. I watched it on television because I had to go home for an injury.”

“Remember, Fernando, that shirt signed in Trinidad and Tobago, with a promise that seemed unrealisable. But we did it. And since then, always together. Vienna, Johannesburg... That unforgettable pass from Xavi to give the success to the wise, to the teacher, to Luis. That cross of yours so that we all score the most important goal of our lives.”

“Separated, but always together. And until the last moment. Above shirts or clubs. We lived in different cities. You, in Madrid and I, in Barcelona. But we were never enemies. Simply friends who wore a different shirt, fused, yes, always in a red skin. Or Rojita, whatever we want to call it.”

“Because our history, although many do not know, comes from afar. From far away. Little did it matter that one day you broke down borders on the way to the Premier League, where they discovered the talent of a unique Niño, first at Liverpool and then at Chelsea.”

“When you returned home to Atlético, I was excited like everyone else because football, beyond sports successes or failures, has a way of understanding life. And you, Fernando, have dignified this sport. Our sport. I do not talk about the goals you have scored, for I lost count many year ago, or the titles you have won in your wonderful career. I talk about your behavior, about your respect for the game, the teammate, the opponent and, of course, the ball.”

“We began together in anonymous fields, far from spotlights and cameras sharing thousands of experiences before winning a World Cup for our country. When we meet again in Spain, I will show you that shirt, that treasure that no one else discovered. Although, it is true, there is no greater treasure than your friendship, Fernando.”

“It has been a wonderful trip. It has taken us to all corners of the world. And look where we are today. In Tosu, you and I playing a football game. One more. But it is not just one more. It is your last game. Who was going to tell us! You face the bold Villa and me. Then, you will return home. Yours are waiting for you, although you have to know that football will be sadder today than yesterday.”

“Enjoy everything that comes to you now and be happy. But how strange, Fernando. You haven't left yet and I miss you already.”

Torres, upon reading this message, responded to Iniesta's letter on Twitter.

He wrote, "Today I woke up knowing that I play my last game as a professional and thinking that I would face it normally. Then I read a friend's letter and I start to get excited... thanks friend, @andresiniesta8."