Messi likened the defeat to the 1-0 extra-time loss to Germany he suffered as Argentina captain in the 2014 World Cup final in Brazil. 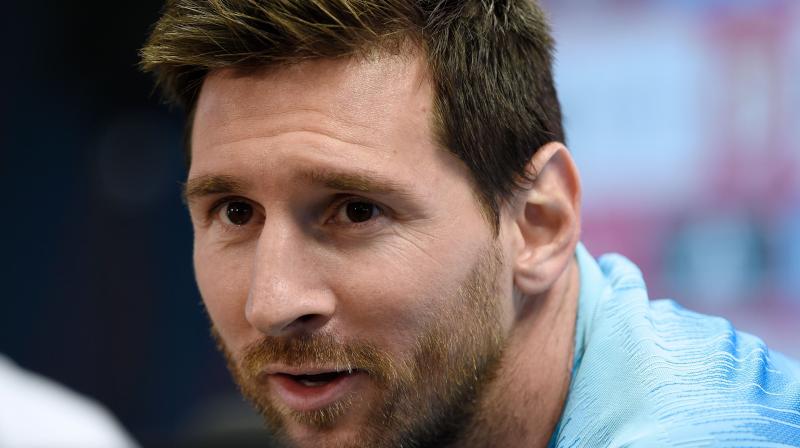 Despite the Catalans retaining the Liga title with three games to spare, Messi cannot shake off the bad memories of the loss to Liverpool. (Photo: AFP)

Barcelona: Lionel Messi has said Barcelona’s shock 4-0 defeat by Liverpool which sent them crashing out of the Champions League has ruined their season as they look to complete a domestic double when they face Valencia in the Copa del Rey final on Saturday.

In his first news conference in over four years and his first media appearance since this month’s 4-3 semi-final aggregate reverse, the usually tight-lipped Messi did not hold back in his criticism of Barca’s display at Anfield.

“The first half wasn’t all that bad but in the second we didn’t even compete, there was only one team on the pitch and that was the biggest mistake we could have made,” Messi said.

“The worst thing we could do, and what we cannot forgive ourselves for, is the fact that we did not compete. We let them walk all over us.”

Barca’s all-time top scorer became club captain for the first time this season but, despite the Catalans retaining the Liga title with three games to spare, Messi cannot shake off the bad memories of the loss to Liverpool.

“I’ve had a spectacular season as captain, we won the league, we’ve reached the cup final, I think it’s been a good year if you take out the Liverpool match, which has regrettably ruined the great season we were having until then,” he said.

Messi’s first act was to tell supporters of his determination to win the Champions League for the first time since 2015, saying he would “do everything to bring that beautiful and desired trophy back here to the Nou Camp”.

That now infamous phrase has been frequently repeated since Barca failed to reach the Champions League final in Madrid due to their defeat by Liverpool, which came after a 3-0 victory over Juergen Klopp’s side in the first leg at the Nou Camp.

“I don’t regret it, I didn’t promise to bring it back, I promised to do everything to try and bring it back although we didn’t do that and we should say sorry to our fans for that because we didn’t even compete,” he said.

Messi likened the defeat to the 1-0 extra-time loss to Germany he suffered as Argentina captain in the 2014 World Cup final in Brazil.

He called on his team to try and forget the galling defeat by Liverpool when Barca take on Valencia in this weekend’s Spanish Cup final, weakened by injuries to his fellow forwards Uruguayan Luis Suarez and Frenchman Ousmane Dembele.

“It’s a final so we have to play it for what it is and not think about anything else. Valencia are a very difficult team, we know each other well, it’s going to be very equal. If we don’t go out with the right attitude we could suffer,” he said.

“No-one should beat us for attitude, we’re going to try and compete like we have done in every game this season, apart from against Liverpool,” Messi added.