The match the Spanish coach was referring to happened just over a month ago. 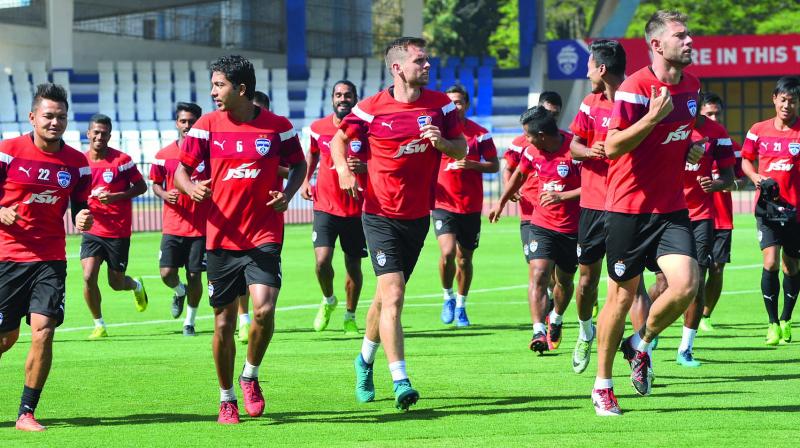 Bengaluru FC players warm up at a training session at Sree Kanteerava Stadium on Friday. Below: East Bengal’s Robin Singh. (Photo: SHASHIDHAR. B)

Bengaluru: “It was in that match that our pain started,” said Bengaluru FC coach Albert Roca on Friday.

The statement was met with muted laughter in the press room. The resounding sound, though, was a contemplative silence.

The match the Spanish coach was referring to happened just over a month ago. The defending champions were on a high going into the match with three consecutive wins.

And then, East Bengal clipped their wings. With a wretched run of six league games without victory, which has arguably put paid to their title aspirations, the Blues, who are fifth in the table with 13 points from nine games, are yet to take flight.

As far as motivations go, the home side will have no shortage of it when they host the Kolkata giants on Saturday.

To put it in simple terms, the hosts desperately need a win. An amalgamation of identity crisis, lethargic performances, bad luck and concentration lapses in crucial moments can all be used to varying degrees to explain, to some extent, the worst-ever run in the history of the club.

Despite the unenviable results, it’s hard not to feel that it’s only a matter of time before they get it right. Waiting for that one elusive win to get their season back on track.

On the other side of the fence are table toppers, albeit on goal difference, East Bengal, who come into the match on the back of two draws and their only defeat this season. A run, if one can call it that, of results which has seen the team fall under pressure. It’s a must-win game for them as well.

With John Johnson and goalkeeper Amrinder Singh adding to the already sizable list of injuries, Bengaluru will be looking for strong performances from Juanan, Sandesh Jhingan, Salaam Ranjan Singh and the ever dependable and former EB captain Harmanjot Khabra to shore up the defence that has conceded more from momentary lapses in concentration than from poor showing.

Still eight goals conceded from nine matches is far from unreasonable. The hosts’ defence, which will feature Arindam Bhattacharya in goal this time, will surely be helped from the fact that the Kolkata side will be without their top striker Willis Plaza who is out with a groin injury. Having said that, Wedson Anselme, Robin Singh and Thongkhosiem Haokip are far from slouches in front of goal. It will also be interesting to see if Trevor Morgan continues to put faith in the system he used in the defeat against Aizawl or return to the tried and tested, and more importantly successful, two-striker system.

Much of Roca’s game plan will depend on winning the midfield battle and the former Barcelona assistant manager will surely drill Cameroon Watson to protect the defence even as Eugeneson Lyngdoh, who has been off-colour so far this season, will be hoping to channel the same form that saw him become one of the biggest players in the country.

Meanwhile, Sunil Chhetri’s guile and Udanta Singh’s speed will be the key for the Garden City club if they are to break the Ivan Bukenya and Arnab Mondal-led defence.