Kerala aim to regroup under Nelo against ATK

Vingada said those transfers happened before he signed and that he would’ve liked to work with the likes of Vineeth and Narzary if they were present. 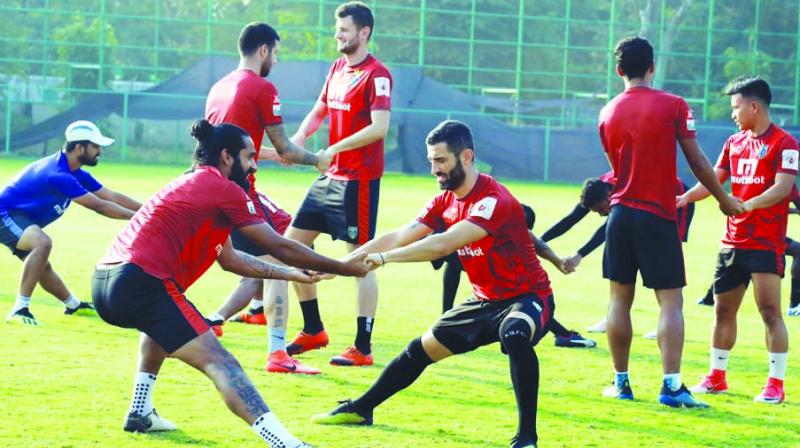 Kerala Blasters players in training on the eve of their Indian Super League match against ATK, in Kochi. (Photo: Arun Chandrabose )

Kochi: Kerala Blasters are back to square one as they aim to regroup under new coach Nelo Vingada for the visit of ATK, an opponent they overpowered 2-0 on the first day of the Indian Super League season but haven’t won any other match since.

As the ISL resumes today from a winter break that was introduced in the wake of India’s campaign at the ongoing Asian Cup in UAE, focus shifts to the two teams that has featured in two of the four finals since the league began in 2014.

Kerala that went into the break after a humiliating 6-1 loss to Mumbai City on December 16 have since replaced their head coach and let go a bunch of key players in the January transfer window that is still open. Shortly before the arrival of former NorthEast United head coach Vingada, who replaced David James last week, Kerala had lost C.K. Vineeth, Halicharan Narzary and Naveen Kumar on loan, the first two to Chennaiyin and the goalkeeper to FC Goa.

Vingada said those transfers happened before he signed and that he would’ve liked to work with the likes of Vineeth and Narzary if they were present.

“But I like to work with the players that are available,” said Vingada. “The most important thing for us now is to get the confidence back and earn the respect of the fans,” said the Portuguese man.

Captain Sandesh Jhingan put an end to the rumours that linked him with a move away from Kerala by appearing beside the manager at the pre-match. Coach Vingada said: “My tactics and my system make up only five per cent (vs ATK), the rest depends on the attitude and spirit of our players.”

Meanwhile, the visitors have a lot more at stake, as with only four points behind NorthEast United that is fourth in the table, Steve Coppell’s side are hoping to get off the blocks quickly.

Englishman Coppell, who coached Kerala to the 2016 final, is wary of Kerala. “It is hard to try and predict what they are going to do but with six games to go we know our agenda. Our focus will have to be more internal.,” Coppell said.

“It is inevitable that the players will try to impress the new coach. We know we have to be at our best to get something out of the game,” he added.