Messi ended up winning the Best FIFA Men's Player of the year and he triumphed over Portugal/Juventus' striker Cristiano Ronaldo. 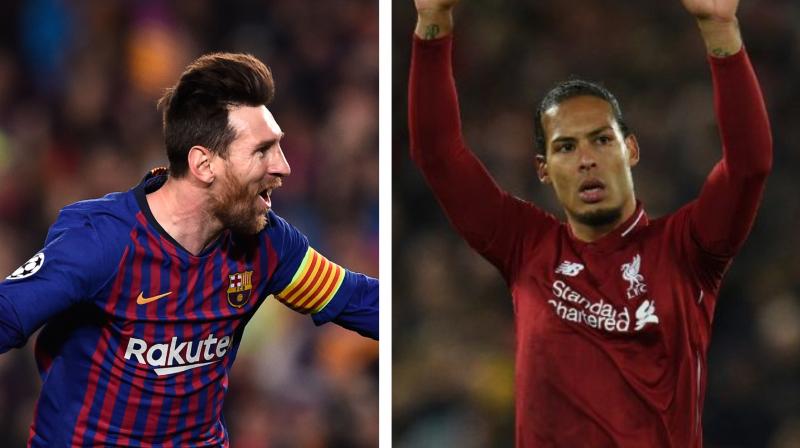 After missing out on the Best FIFA Men's Player of the Year award, Liverpool's defender Virgil van Dijk said that one cannot compare him with Argentine striker Lionel Messi. (Photo:AFP)

Milan: After missing out on the Best FIFA Men's Player of the Year award, Liverpool's defender Virgil van Dijk said that one cannot compare him with Argentine striker Lionel Messi.

"The people who vote made a decision and you have to accept it. That is just the case and as players, you can't compare me and Messi because it's totally different. I am very proud to be here," Goal.com quoted van Dijk as saying.

Van Dijk had earlier triumphed over Messi and Ronaldo to win the UEFA Best Men's Player of the year.

Messi scored 51 goals across 50 appearances for the Spanish side, marking his 10th consecutive season with at least 40 finishes.

Liverpool defender had helped his side to win Champions League last season and the team fell short to Manchester City in the Premier League.

The Reds missed out on the Premier League title by just one point as City finished with 98 points as compared to Liverpool's 97.

Van Dijk also led his international side Netherlands to the inaugural Nations League final, where they lost to Ronaldo's Portugal.

The 28-year-old van Dijk was named in the FIFA World XI and he said he was not disappointed on losing the FIFA Best player award.

"Disappointed? You cannot be disappointed. I am just very happy to be here, to be in the team of the year, after the hard work and the good work we put in last year," van Dijk said.

"Today, I, unfortunately, didn't win but I'm not disappointed," he added.

Liverpool will next face MK Dons in the Carabao Cup on Wednesday.