“I really appreciated that,” said Rooney in a statement sent to Press Association. 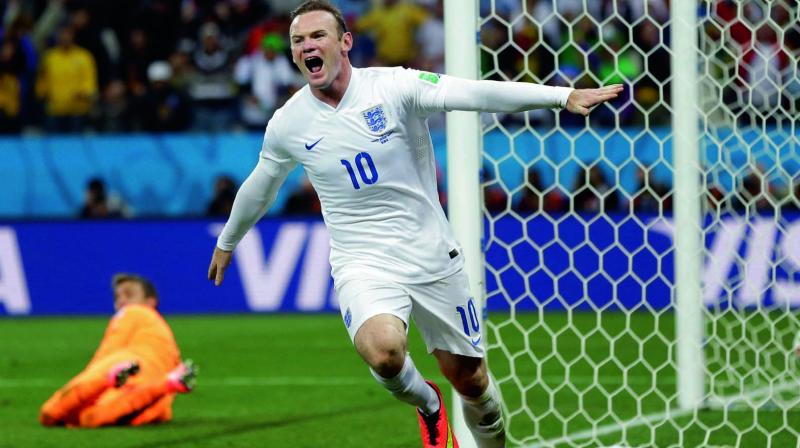 London: England’s record goalscorer Wayne Rooney announced on Wednesday he is retiring from international football with immediate effect after manager Gareth Southgate tried to recall him to the squad. The 31-year-old — scorer of 53 goals in 119 appearances for his country — told Southgate of his decision during a phone conversation on Tuesday.

Southgate had phoned Rooney — who had lost both the captaincy and eventually his place in the squad as he became a peripheral figure under Jose Mourinho at Manchester United last season — to congratulate him on his early season performances for new club Everton.

Rooney has looked rejuvenated and happy — scoring in both their Premier League matches so far — since he re-signed for the club that nurtured his talent as a teenager before he left for United. “It was great that Gareth Southgate called me this week to tell me he wanted me back in the England squad for the upcoming matches. “I really appreciated that,” said Rooney in a statement sent to Press Association.

“Having already thought long and hard, I told Gareth that I had now decided to retire for good from international football. It is a really tough decision and one I have discussed with my family, my manager at Everton (Ronald Koeman) and those closest to me.

“Playing for England has always been special to me. Every time I was selected as a player or captain was a real privilege and I thank everyone who helped me. “But I believe now is the time to bow out.” Rooney, England’s most capped outfield player, said his sole purpose now in football is to ensure Everton win trophies.

He had alluded to his priorities in a post-match interview on Sky Sports on Monday after he matched Alan Shearer in scoring 200 Premier League goals — made sweeter as it came against Manchester United’s city rivals Manchester City.

“Leaving Manchester United was a tough call but I know I made the right decision in coming home to Everton,” said Rooney. “Now I want to focus all my energies on helping them be successful.”

‘Icon of his generation’
Another former England great, Gary Lineker said earlier on Wednesday that Rooney had been unlucky to be the only world-class player in many England sides that struggled to make an impression on either the world or European stage.

“One of my very few regrets is not to have been part of a successful England tournament side,” said Rooney, whose four goals in Euro 2004 propelled England to the quarter-finals before their hopes were extinguished when he broke a bone in his foot in the last-eight clash against hosts Portugal.

“Hopefully the exciting players Gareth is bringing through can take that ambition further and I hope everyone will get behind the team. “One day the dream will come true and I look forward to being there as a fan — or in any capacity.” Figures from English football were quick to pay tribute to Rooney. “Congratulations to @WayneRooney on a magnificent international career. A player’s player,” said Linekar on Twitter.

Greg Clarke, chairman of English football’s governing body the Football Association said Rooney had earned the right to be termed a “legend”. “Today marks the end of an era in international football,” said Clarke. “Wayne Rooney is an icon of his generation and an undoubted legend of the game.”

Former England captain Terry Butcher said Rooney had taken the right decision. “You do know as an international player when you have reached the point of no return,” Butcher told the BBC. “Sometimes you want to jump before you are pushed.” Manchester United kept their tribute to a short tweet. “Well done on a record-breaking @England career, @WayneRooney!”