"The important thing was to win to keep going in the Copa, to get through the group stage," said Messi. 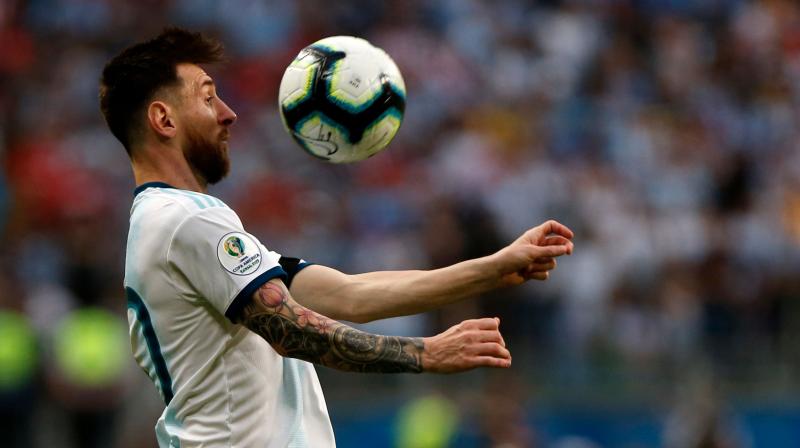 Goals from Lautaro Martinez and Sergio Aguero were enough to propel Argentina from bottom of Group B to second and into the quarter-final (Photo: AFP)

Porto Alegre: Argentina will start from afresh in the Copa America after averting disaster with Sunday's 2-0 victory over Qatar that sent them into the knock-out stages, star Lionel Messi said.

Goals from the Barcelona icon's forward partners Lautaro Martinez and Sergio Aguero were enough to propel Argentina from bottom of Group B to second and into a quarter-final meeting with Venezuela on Friday at Rio's Maracana stadium.

"The important thing was to win to keep going in the Copa, to get through the group stage," said Messi, who will turn 32 on Monday.

"This will be an important boost for what's to come ... another Copa begins now.

"This victory must give us strength and make us grow as a team."

Argentina's performance was far from pitch-perfect, but they were good enough to beat a limited Qatar side, who gifted them the opening goal after four minutes when Bassam Hicham played a suicidal ball across his own box straight to Martinez.

Messi admitted, though, that there were nerves in the Argentina camp.

"It's tough playing this kind of game due to the necessity, the obligation (to win), the fear of missing out.

"But beyond that we played well and went through, which is what matters." Aguero, who was recalled after he was dropped for the 1-1 draw with Paraguay, had a mixed game alongside Messi and Martinez.

He worked hard to create chances for himself but lacked sharpness and precision in his finishing, until his brilliant goal where he burst past two defenders before shooting high into the far corner.

"Luckily I was picked to start and luckily at times the three of us worked well together and we won," he said.

Argentina will now play a side who beat them 3-1 in a friendly in Madrid in March.

"They're quite tough opponents who counter-attack really well and we'll try to be wise to that," said Aguero.

Coach Lionel Scaloni gave a sober assessment of Argentina's form after a third straight match in which they struggled for long periods and failed to entirely convince.

"We're satisfied because we're in the next round ... but we have to improve in every aspect," he said.

"Today at times the team played well and rid itself of fear." And Scaloni hit out at claims back home that the squad was divided.

"As long as we're playing in the Copa, everyone's pulling for the same side. There must be total unanimity," he said.

"Many players aren't even 25 yet and it's a positive thing for them to have played in this match." However, he was scathing about the state of the Arena do Gremio pitch in Porto Alegre, which will host a both a quarter-final and a semi-final.

"You can't play on this pitch. Even so we tried to play, to press high, we played very well in the second half." He had kind words for Qatar, who head home after a draw and two defeats from their three group games.

"They're a very worthy team with a great future, with young players," he said. The Asian champions, who will host the 2022 World Cup, have been invited back to next year's Copa America, which will be played in Argentina and Colombia.