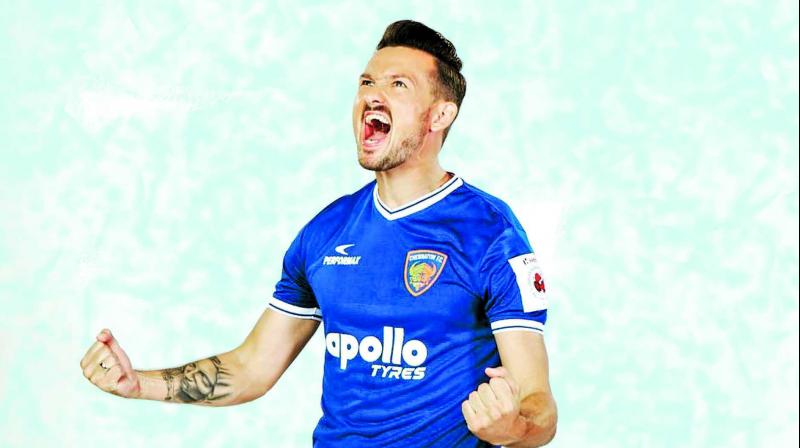 Lithuanian Nerijus Valskis is Chennaiyin FC’s goal scoring machine. The 32-year-old forward has been in sublime form this season, scoring eight out of 12 CFC’s 12 goals.

Valskis spoke to this newspaper on a variety of topics. Read on...

First experience of dribbling football?
I was six years old, when my older brother taught me how to dribble.

Childhood ambitions?
As a child, I was always focussed on sports. As you grow older, you think about your ambitions and profession. As a kid I just enjoyed my game. I didn’t want to go to school. I loved the game so much that I just wanted to play football all the time and keep developing my skills. Once I became older, I knew this was it.

Did you play any other sport?
In Lithuania, basketball is a very popular sport. I used to play basketball, but then I realised my love for football is so intense that I can’t play other sport (laughs).

Toughest part of being a professional player: On a couple of occasions, I made bad decisions to move from one team to another. I have some bad memories from Romania, where our thoughts weren’t aligned and they (the team) released me.

Most memorable sporting moment: Three years ago, when I played for Bnei Yehuda Tel Aviv in Israel State Cup, we beat one of the strongest team in Israel. Thousands of fans cheered for us; it was incredible.

Heroes in sports: Cristiano Ronaldo and Lionel Messi. Ronaldo is a good finisher, but Messi is the best.

Sporting event you would pay the most to see: I want to see NBA games. I am eager to watch some cricket matches. I was looking forward to attend India vs West Indies ODI in Chennai, but we had other commitments.

If you could change one rule in your sport, what would it be?
I don’t want to change any rule in this game. Football has best rules and it is perfect.

Sporting motto: Learn from mistakes and keep trying. Don’t stop. Football always gives you something back.

Who would you most like to invite to dinner — and why?
I want to invite my wife and kids. I miss them.

Other interests in your life: Surfing and fishing.

What do you never leave home without?  My football insoles. I can change shoes but will never leave my insoles.

The craziest thing you have ever done: Signing a league contract in Thailand when on a vacation