The 21-year-old continued his good form with FC Pune City in ISL-5 and showed he can play as striker also. 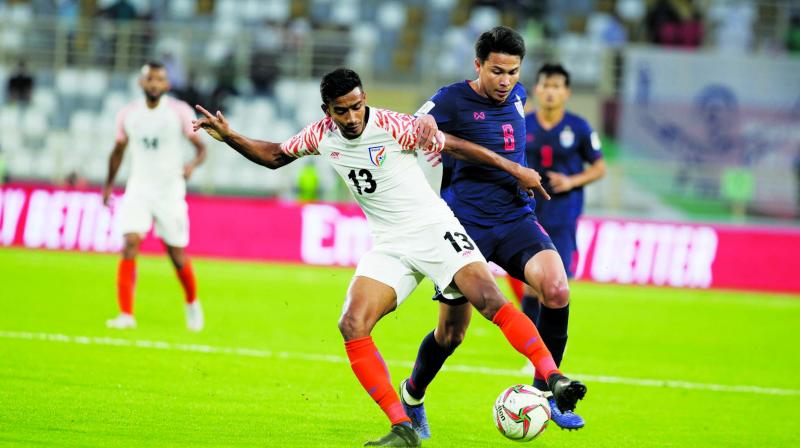 Indian forward Ashique Kuruniyan in action against Thailand in the first league game of the AFC Asian Cup in Abu Dhabi.

Ashique Kuruniyan has made significant progress in last couple of years. From learning professional trait with disbanded Pune FC Academy, he rose in ranks with FC Pune City last season in the Indian Super League. The impressive showing from the lanky left-winger made former Indian senior football team head coach Stephen Constantine take note of him and call him for the preparatory camp in Mumbai.

He eventually got into the final Indian squad for the four-nation Inter-continental Cup at Mumbai Football Arena in June last year. He made so much impression on Constantine through his commitment and energy that he got his first appearance for India in the first league game against Chinese Taipei itself. A game later he got his first ever start for India against New Zealand.

The 21-year-old continued his good form with FC Pune City in ISL-5 and showed he can play as striker also. His quality play was one of the bright sparks in his franchise’s ordinary showing so far. Not only he retained his place in the Indian senior team for the prestigious AFC Asian Cup in UAE but was handed starts in the all the three league games by Constantine. The utility player was used as striking partner to talismanic Sunil Chhetri.

“Playing as a striker was a tough challenge but I am buoyed by the fact that I gave my hundred percent on the field. There is always room for improvement and now I have to continue to work on my game,” a release from All India Football Federation, said.

Kuruniyan who lives in Malappuram, dropped out of school to help his father in his sugarcane shop. But he found time to play football on the fields during evenings and was soon selected by Vision India, a scheme started by the Kerala Football Association. He was with the academy until 2014 before he joined the Pune FC academy and his professional journey began.

In 2016, when Pune’s academy was sold and converted to the FC Pune City Academy, Kuruniyan joined them. He had a good outing under Serbian coach Ranko Popovic. This season also despite the team’s poor showing he managed to carve his niche with some brilliant performance in the field. He carried that form to the UAE.

“It was a big tournament for all of us. The experience of playing in it was incredible. I was fortunate enough to play in all three matches and it has added to my confidence. We got to play against some of the best players in the continent. It was a huge lesson for all of us as far as decision making in the match was concerned,” he added.

Ashique will now resume playing for FC Pune City in ISL and his next target will be to get selected for the India U-23 team – first for the Camp, and then in the final list of 23 for the AFC 2020 U-23 Championship qualifiers.