Despite boasting the attacking talents of Ronaldo, Dybala and Gonzalo Higuain. 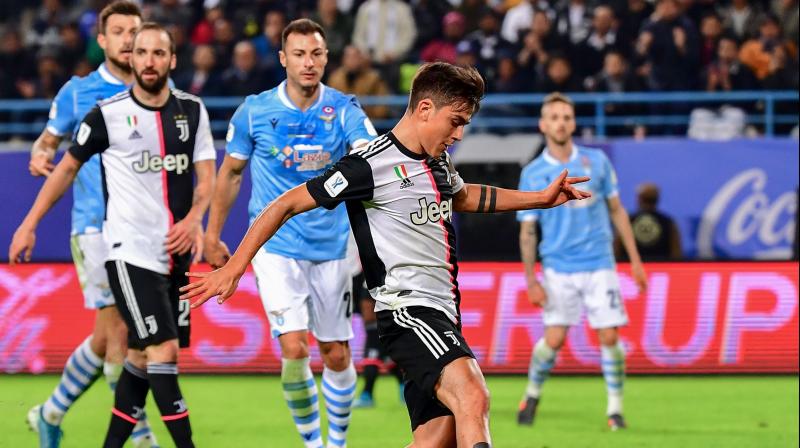 Lazio won the Italian Super Cup for a fifth time on Sunday, defeating Juventus 3-1. Lazio, the only team to have defeated Juventus in Serie A this season, were in front through Luis Alberto after 16 minutes. Paulo Dybala levelled just before the break after a shot from Ronaldo was parried into his path by Lazio's Albanian goalkeeper Thomas Strakosha. (Photo:AFP)

Riyadh: Lazio won the Italian Super Cup for a fifth time on Sunday, defeating Cristiano Ronaldo's Juventus 3-1 in a game played in the Saudi Arabia capital of Riyadh.

"We did something magical tonight," said Lazio coach Simone Inzaghi.

Lazio, the only team to have defeated Juve in Serie A this season, were in front through Luis Alberto after 16 minutes.

Paulo Dybala levelled just before the break after a shot from Ronaldo was parried into his path by Lazio's Albanian goalkeeper Thomas Strakosha.

Despite boasting the attacking talents of Ronaldo, Dybala and Gonzalo Higuain, it was the Roman side who looked more likely the next to score.

Danilo Cataldi added a third in the fourth minute of stoppage time from a free kick after Juve's Uruguayan midfielder Rodrigo Bentancur had been sent off.

Lazio had already defeated Juve 3-1 at the Stadio Olimpico in Serie A two weeks ago -- until Sunday that was the only defeat suffered by Maurizio Sarri in his time as coach of the Italian champions.

"We did something magical -- to beat Juve twice in two weeks is incredible," Inzaghi told Rai Sport.

"I think this was another deserved victory for a strong team that always believed in our ideas."

Their Serie A meeting in Rome was a world away from Sunday's proceedings in the King Saud University Stadium where women supporters were allowed to attend.

Ronaldo was the main reason the fans came to watch and Juve obviously took the occasion on board with their famed black and white shirts sporting Arabic designs.

"We are sorry we lost a trophy, but we still have many competitions at stake in the next five months," said Sarri.

"There is anger but crying over it does not solve the problems." Juve are no strangers to Saudi Arabia having won the Super Cup in Jeddah in January this year, beating AC Milan 1-0.

The Turin giants had been looking to win the trophy for a ninth time. Juventus will now turn their attentions to defending their Serie A title. They are currently level at the top of the table with Inter Milan while Lazio are third, six points off the pace.