Oscar, snared for a reported €70.5 million, becomes just the latest top player in his prime lured to the mega-rich Chinese Super League. 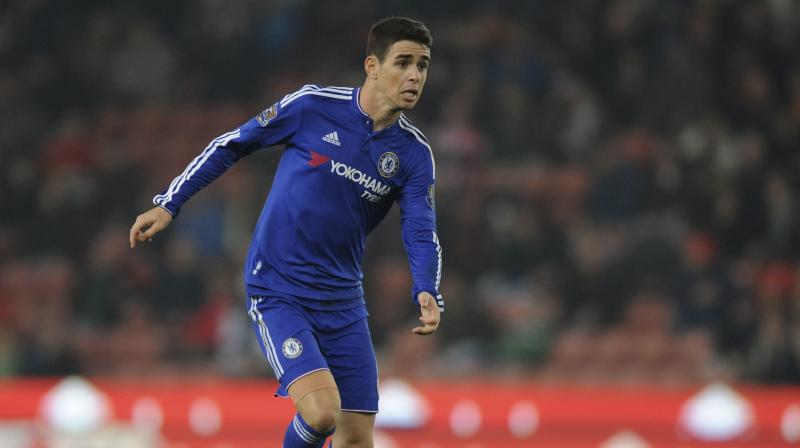 Shanghai: Chelsea's Oscar said he was looking forward to joining his "new family" on Friday after Shanghai SIPG sealed terms on what will be China's fifth Asian-record signing in less than a year.

The 25-year-old Brazil midfielder, snared for a reported €70.5 million, becomes just the latest top player in his prime lured to the mega-rich Chinese Super League.

He is due to finalise the deal in Shanghai in the "coming days", said the Chinese club, which is coached by ex-Tottenham Hotspur manager Andre Villas-Boas.

"I'm very happy to sign to SIPG. This is an important day for me to join to my new family in China," Oscar said in a video statement released by SIPG.

Chinese Super League clubs have already splashed out more than $400 million on players this year, after President Xi Jinping laid out a vision of turning the country into a football power.

Chinese teams broke the Asian record three times in just 10 days in the January-February transfer window, and moved it still higher when Brazil's Hulk joined SIPG for €55.8 million in July.

Significantly, Chinese clubs are now competing with European rivals for world-class players, who are opting for China's astronomical pay packets over the chance of a career in football's top leagues.

Oscar's ex-Chelsea team-mate Ramires 29, and Alex Teixeira, 26, are other highly rated Brazilians in their twenties to join the Super League for record sums this year.

Other world-renowned players in China include Hulk and Jackson Martinez, both 30, and Ezequiel Lavezzi and Graziano Pelle, both 31.

According to reports, some of the players are now among the highest paid footballers in the world.

A Chelsea statement said Oscar will join SIPG at the start of the January transfer window, noting he has won the Premier League, League Cup and Europa League titles during his four-and-a-half years at the London club.

"Oscar will arrive in Shanghai in the coming days to officially join SIPG."

He has been a target of Shanghai's new manager Villas-Boas since the Portuguese managed Tottenham Hotspur in the 2012/13 season, but opted to join Chelsea instead.

Last week Chelsea boss Antonio Conte, when asked to comment on Oscar's impending transfer, called China's financial muscle "a danger for all teams in the world".