Iran were offered a lifeline as substitute Karimi poked in a Sayyad header to make it 3-1, but it was too late. 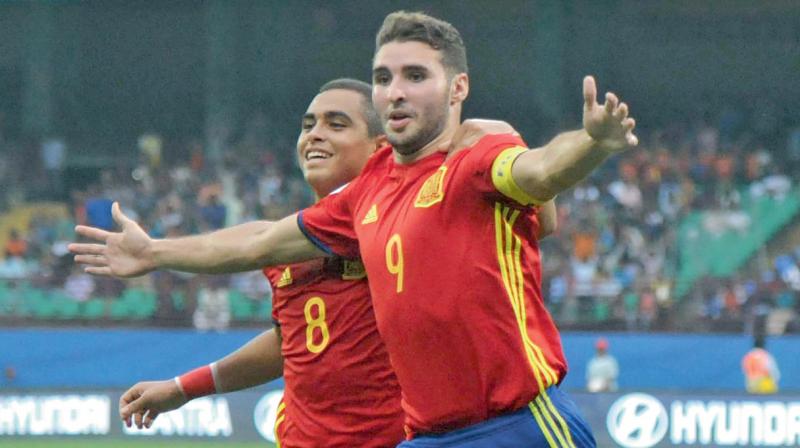 Kochi: Spain breezed past a timid Iran 3-1 to reach the semi-finals of the Fifa U-17 World Cup here on Sunday.

A Sergio Gomez rocket at the hour was sandwiched between Abel Ruiz’s 13th minute opener and Ferran Torres’s stretched finish on 67 minutes while substitute Saeid Karimi’s goal two minutes after Spain’s third was a mere consolation for Asia’s last hope in the competition.

The European champions will face African Cup winners Mali in the second semi-final in Mumbai on October 25.

Spain’s ambition was eloquent from the off while Iran’s pragmatism left them desperately late to salvage anything more than just the pride of participating in a World Cup knockout phase.

The Melli Nojavanan hardly touched the ball in the first five minutes and their desperation to make an early impact resulted in launching long balls aimed at Allahyar Sayyad.

It was a dangerous game to play and Spain happily obliged while they kept knocking, persistently, on the doors of Iranian defence.

The La Rojita’s reward came with a slice of luck as after Abel Ruiz’s tame initial shot from six yards was blocked off, the rebound fell kindly for him and the Spanish captain couldn’t miss, for his fourth of the tournament.

Iran’s narrow defensive line was guilty on the occasion as it allowed Spain’s Ferran Torres and Sergio Gomez space and a spell of imagination. Torres found his wily compatriot with a lofted cross and though the Barcelona winger’s initial lay-off was blocked, he found his club-mate on the second attempt.

The setback prompted Iran to wriggle out of their defensive cocoon but Abbas Chamanian’s boys failed to string more than two passes in the final third.

For all their craft, Spain were equally profligate and Ruiz could’ve bagged a hat-trick in the first half. After Mateu Jaume had sneaked inside and hit the side-netting, Cesar Gelabert missed a glorious chance when Gholam Zadeh parried a Torres cross on to his path but his shot was deflected over.

The game continued along a drab narrative after the break but as the clock struck the hour mark, a Sergio Gomez thunderbolt gave it a flogging. Torres had found Gomez with a routine pass but the Spanish no. 10 unleashed a cracker from 30 yards and there was a collective sigh of disbelief in the crowd — a record 28,436 — as soon as it sailed past Zadeh.

Iran were offered a lifeline as substitute Karimi poked in a Sayyad header to make it 3-1, but it was too late.

The final 30 minutes was madness as the game was flung open and after Ruiz had flashed wide from Zadeh’s poor clearance Shariati made a goal-line clearance to deny Gelabert. At the other end, Alvaro Fernandez made a low save to deny substitute Mohammed Sardari but by then Iran’s exit visa had already been stamped.