Samba juniors come from behind to down Germany in last eight encounter. 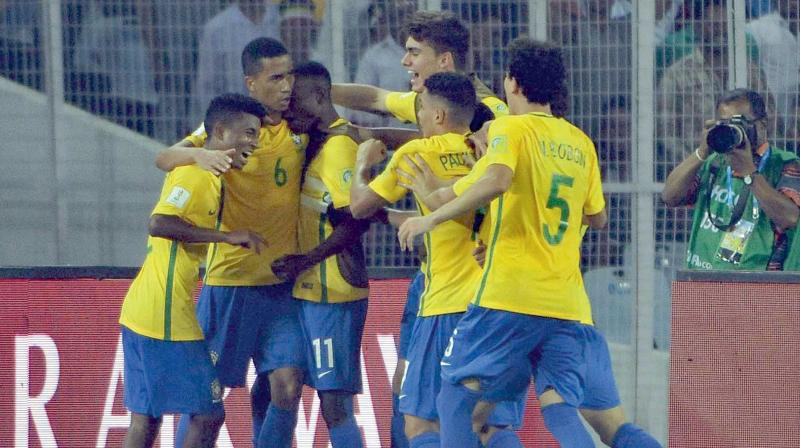 Brazil’s Weverson (second from left) celebrates with team mates after scoring against Germany in their U-17 World Cup quarter-final in Kolkata on Sunday. Brazil won 2-1. (Photo: Pritam Bandyopadhyay)

Kolkata: Brazil turned around the first-half deficit to defeat Germany 2-1 in the quarter-finals of the Fifa Under-17 World Cup in Kolkata on Sunday.

Playing in front of a passionate crowd of 66,613 at the Vivekananda Yuba Bharati Krirangan Stadium, Brazil made the brighter start to the contest and went close to taking the lead just six minutes in. Brenner won possession on the edge of the Germany box and found Alan, whose low drive struck the far post.

As the match passed the quarter-hour mark, Germany settled down and looked the better side up to half time.

They would open the scoring from the penalty spot on 21 minutes after John Yeboah was tripped by a sliding Lucas Halter in the Brazil box.

Captain Jann-Fiete Arp converted his spot-kick for his joint-leading fifth goal of the tournament.

Yet, it was in the second half that the South American champions turned the match around with two goals in six minutes.

After missing several chances, centre forward Lincoln being the guilty party, Brazil produced two moments of quality when it mattered the most.

Substitute Weverson levelled matters on 71st minutes with a powerful shot off the underside of the crossbar before Paulinho drove home a bullet finish six minutes later, to the delight of the Brazil-supporting Kolkata crowd.

Leading till the 70th minute, German players were left distraught at the end of full-time.

They were rattled after the two quick goals as they failed to gather any momentum, despite upping the tempo and receiving six minutes as added time, to mount a comeback and force a penalty shootout.

Germany received three consecutive corners in the dying minutes but Brazil were able to hold on.

The result sent Brazil into a last-four meeting with England, who brushed aside USA 4-1 on Saturday, in Guwahati on Wednesday.