Real Madrid eased the pressure on Zinedine Zidane and delivered a resounding response to their loss to Paris Saint-Germain. 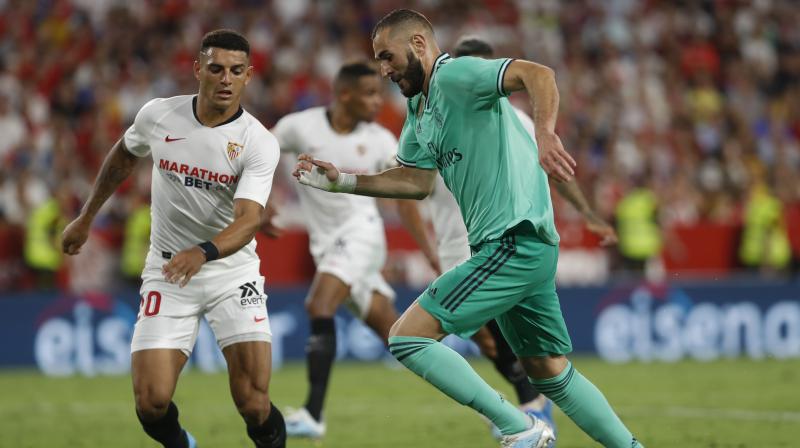 Karim Benzema headed in the decisive goal at the Ramon Sanchez Pizjuan to secure an impressive victory against a Sevilla side that were unbeaten and hoping to return to the top of the table. (Photo:AP)

Madrid: Real Madrid eased the pressure on Zinedine Zidane and delivered a resounding response to their loss to Paris Saint-Germain by winning 1-0 away at high-flying Sevilla in La Liga on Sunday.

Karim Benzema headed in the decisive goal at the Ramon Sanchez Pizjuan to secure an impressive victory against a Sevilla side that were unbeaten and hoping to return to the top of the table.

Instead, it is Madrid that go level on points with Athletic Bilbao in first place after a controlled and determined performance that was by some distance their best since Zidane's return as coach in March.

"We have had a quite difficult time but the players reacted," Zidane said.

His position had come under scrutiny after Madrid's woeful 3-0 defeat by PSG in the Champions League on Wednesday, a result that continued their bumpy start to the season, following a turbulent summer in the transfer market.

But this win should do wonders for belief and leaves Barcelona as Spain's chief club in crisis, with Ernesto Valverde under pressure after they were beaten 2-0 by Granada on Saturday. Madrid are now four points clear of the Catalans after five games played.

"I am very happy as people have been questioning us a lot," said Zidane.

"But we don't think much about that. We played 90 minutes at a very high level in a difficult stadium. We must congratulate all the players."

Not for the first time this season, Zidane singled out Gareth Bale for praise.

"Today hard work was the key," he said.

"The effort made by James, Gareth, all of them."

Sevilla's newly-installed coach Julen Lopetegui was sacked by Madrid 11 months ago, 139 days after taking the job that cost him the chance to lead Spain at the World Cup.

He insisted on Saturday there was no desire for revenge but it is hard to imagine victory would not have brought a little extra satisfaction.

Zidane was asked about his own future as well, several times, and while he maintained he still feels the full backing of the club, there was a warning too. If support dwindles, he said, "then it would probably be best to leave".

But for all the problems -- a dreadful pre-season, signings and sales missed, poor performances against Real Valladolid, Villarreal, Levante and PSG -- Madrid now sit second, buoyed by a display that may yet prove a springboard for games to come.

A frantic opening half an hour made for an engrossing contest but there were few chances, as Lopetegui earned himself a booking for beckoning Gareth Bale to be shown a yellow card.

Real Madrid probably just shaded the first period and had its two best chances as Eden Hazard was slipped in by Benzema, only to be denied by Tomas Vaclik on the angle, before Dani Carvajal was sent clear by James Rodriguez but this time Vaclik's right foot blocked the defender's finish.

There was little in it, as Bale's excellent cross almost found James at the back post shortly after half-time while Luuk de Jong went close with a header, prompting Carvajal to hack the ball clear at the far post.

Still, Madrid looked more likely and so it proved as Raphael Varane won back possession high up, allowing Bale to thread Carvajal in behind. He dug out a cross, which Benzema met brilliantly, rising high to head home his fifth goal of the season.

Sevilla might have equalised but De Jong headed wide under pressure from Carvajal and then Javier Hernandez did score, in the 87th minute, poking in at the near post, only for the assistant to raise his flag.

Bale could have made it two late on but hit the side-netting from an acute angle. One was enough.