Chelsea climbed into Champions League qualifying spot, one point above Arsenal and three ahead of United, but has played one game more. 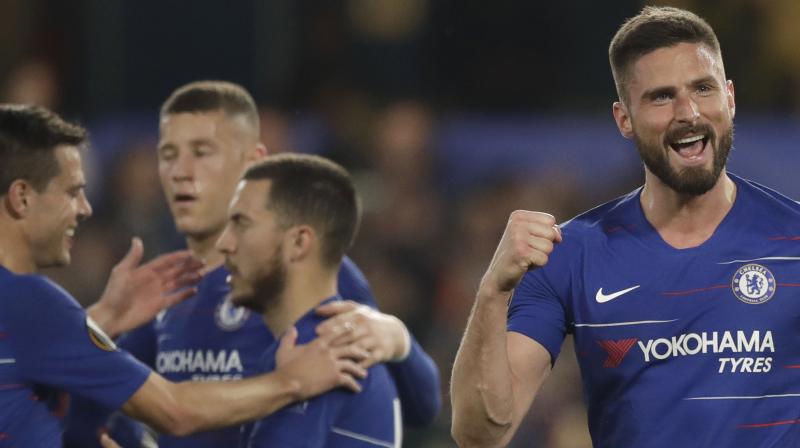 Chelsea moved into the Premier League's top four on Monday with a frustrating 2-2 draw with Burnley.

Goals two minutes apart from N'Golo Kante and Gonzalo Higuain put Chelsea on top at Stamford Bridge after Jeff Hendrick had given Burnley an early lead.

But Ashley Barnes pulled the visitors even in the 24th minute and Chelsea was unable to get the winner despite dominating possession and finishing with 22 shots.

Chelsea climbed into the final Champions League qualifying spot, one point above fifth-place Arsenal and three ahead of Manchester United, but has played one game more.

Along with the disappointment of dropping points, the Blues were also left frustrated by what they felt was time wasting on Burnley's part.

"We wanted to win. They didn't want to lose," assistant coach Gianfranco Zola said. "There was too much time wasting. We couldn't build important rhythm."

Chelsea also has injury concerns after Kante left the game with a rib problem and winger Callum Hudson-Odoi was forced off by what he later said on social media was a ruptured Achilles tendon.

Burnley, meanwhile, all but guaranteed its Premier League status for another season.

The Clarets are nine points ahead of Cardiff in the final relegation place with three games left and have a far superior goal difference.

"I don't think we can relax and enjoy it - but after the season we've had to get to 40 points is a big marker," manager Sean Dyche said. "We know, unless strange things occur, we'll be working in the Premier League again next year."

Hendrick opened the scoring from the edge of the penalty area in the eighth minute after Chelsea failed to clear a corner kick.

It was a short-lived lead however as Kante equalized in the 12th minute and Higuain struck moments later to put Chelsea on top.

But Burnley took advantage of another set piece when Chris Wood headed a free kick across goal and Barnes tucked it home to make it 2-2.

Chelsea then dominated the second half but came up empty against a resilient Burnley defense.

The Blues' frustration boiled over a bit in stoppage time as David Luiz clashed with Ashley Westwood and manager Mauricio Sarri was sent to the stands.

Chelsea defender Antonio Rudiger and Burnley goalkeeping coach Billy Mercer also got into it after the final whistle and had to be separated by the officials.