If they beat Alaves and Atletico Madrid fail to win against Valencia 24 hours later, then Barca will be crowned champions on Wednesday. 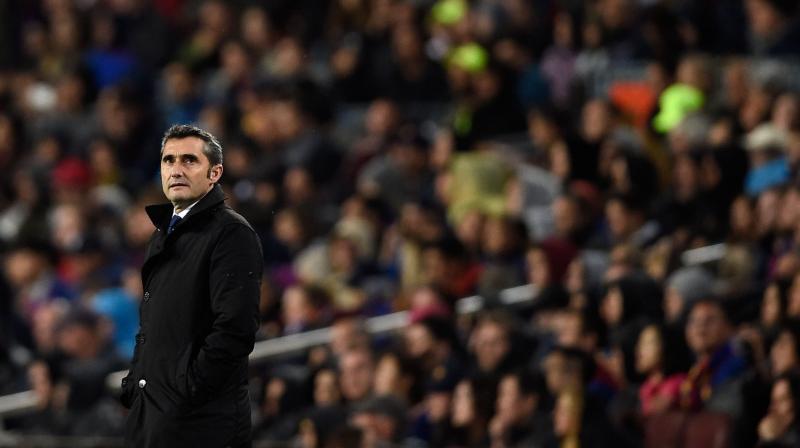 Valverde is likely to give winger Ousmane Dembele a run out as he continues to recover from a hamstring injury suffered last month. (Photo: AFP)

Madrid: Barcelona are fully focused on winning La Liga and if possible want to wrap up the title before next week’s Champions League semi-final clash with Liverpool, coach Ernesto Valverde said on Monday.

The Catalans, who are on 77 points and are nine ahead of second-placed Atletico Madrid, travel to Alaves on Tuesday.

If they beat Alaves and Atletico Madrid fail to win against fifth-placed Valencia 24 hours later, then Valverde’s side will be crowned champions on Wednesday.

“A lot of people ask me if we want to get La Liga boxed off and that’s what anyone would want to do,” Valverde told a news conference.

“We want to win La Liga, whenever that may be and we’ll see if we can get that done.

“It looks easy on paper: a win here, a draw there, we win it on a certain day but we have a lot of good teams to face with a lot to play for and things aren’t easy.”

Valverde is likely to give winger Ousmane Dembele a run out as he continues to recover from a hamstring injury suffered last month.

“He’s not at 100 per cent. He will be getting his rhythm (back) little by little; he brings us a lot of speed and that will come in useful against sides who want to press high as we can use him in the spaces that leaves.”

The 55-year-old was curt when asked whether Dembele would replace Philippe Coutinho in the pecking order now that the Frenchman was back from injury.

“Here nobody has gone in front of anybody. Everyone we have here is a great player and while we might have had situations where one has replaced the other one, that kind of thing happens in all clubs,” he said.

“Each player is looking for his place and to be in the best shape they can be. In this case, Dembele has played, or Coutinho has played. They can even play together.”

Valverde will be without long-term absentee Rafinha for the trip to the Basque country, while Thomas Vermaelen and Samuel Umtiti remain doubts.

Alaves, who are eighth on 46 points, will be without Jonathan Calleri (suspended) and injured trio Guillermo Maripan, Takashi Inui and Jorge Burgui.