Manchester United cruised into the Europa League last 16 with a 1-0 win at St Etienne. 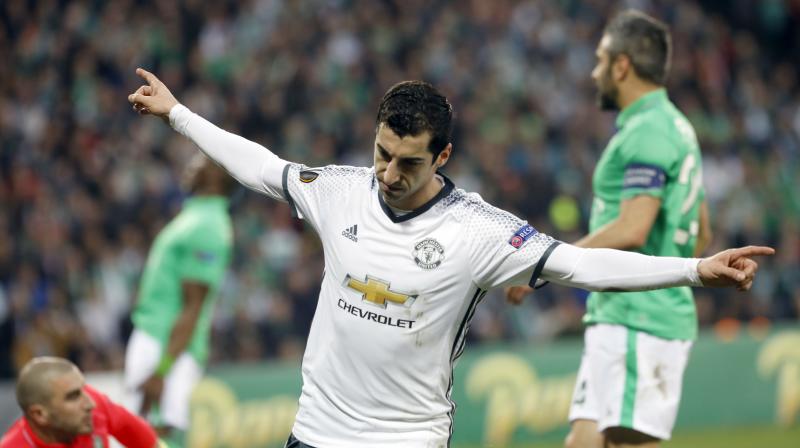 Henrikh Mkhitaryan scored but was then forced off with a hamstring injury. (Photo: AP)

Saint Etienne: Henrikh Mkhitaryan scored but was then forced off with a hamstring injury as Manchester United cruised into the Europa League last 16 with a 1-0 win at St Etienne on Wednesday.

That completed a 4-0 aggregate victory in the last 32 tie, although United finished the match with 10 men after Eric Bailly was dismissed for two yellow cards in quick succession.

Manager Jose Mourinho will face an anxious wait ahead of Sunday's English League Cup final against Southampton at Wembley to see if his Armenian playmaker is fit.

Mkhitaryan has been involved in five goals -- scoring three and creating two -- in his last six games and would have been a likely starter at Wembley.

Despite leading 3-0 from the first leg at Old Trafford last week, Mourinho showed how highly he values success in this competition -- which offers a route into next season's Champions League to the winners -- by picking a strong starting line-up.

Zlatan Ibrahimovic and Paul Pogba were restored to the starting line-up after making a decisive contribution off the bench against Blackburn in the FA Cup on Sunday -- the Frenchman teeing up the Swede to score the winning goal.

There was none of the early match defensive jitters from United, and centre-back Bailly in particular, that had brought a rebuke from Mourinho following the first leg in which he accused his players of not having been focussed enough.

And it took just 16 minutes for United to extinguish any fanciful hopes the hosts might have harboured of mounting a memorable comeback -- when the opening goal came, it was almost too easy.

Juan Mata used Daley Blind as a decoy to make space for himself down the left and his pinpoint cross was met by Mkhitaryan, dissecting the home centre-halves, to flick past the helpless Stephane Ruffier in the home goal.

By then the visitors had already established control of the ball in midfield and looked comfortable spraying it around patiently.

Mourinho was forced into an early change as Mkhitaryan seemed to tweak his hamstring and was replaced by Marcus Rashford on 25 minutes.

United looked by far the more dangerous of the two sides but St Etienne did sound a warning from a set-piece seven minutes from the break as Jordan Veretout picked out Loic Perrin, only for the captain to head straight at Sergio Romero, celebrating his 30th birthday.

It was, at least, the Ligue 1 side's first effort on target over the two legs.

Roared on by a passionate home crowd at the Stade Geoffroy Guichard, St Etienne played with energy at the start of the second half but it was United who should have doubled their lead as Marouane Fellaini fired into the side-netting when well placed.

Things got interesting just after the hour mark as Bailly was sent-off for picking up two bookings in three minutes -- the second when he clearly won the ball in a challenge with Romain Hamouma -- much to Mourinho's obvious annoyance.

Mourinho had to quickly rejig, with centre-back Marcus Rojo replacing Mata and United shutting up shop.

St Etienne were reduced to Florentin Pogba, Paul's brother, trying his luck with a volley from 30 yards that sailed wide, summing up their impotency in front of goal over the two legs.

Rashford's pace was causing St Etienne problems and he clipped a ball over the top from Blind across the face of goal.

Tougher nights in Europe than this await United, but at least it gave them a chance to quickly turn their attention to Southampton.