Reports suggest about 20 per cent of tickets have been sold online so far. 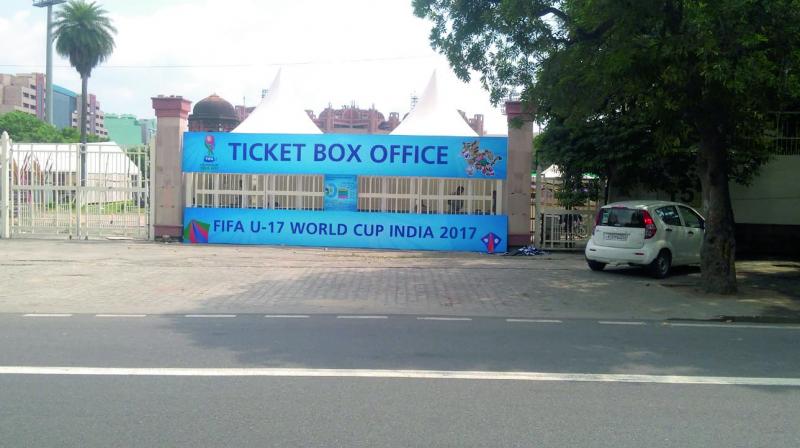 The counter at the Jawaharlal Nehru Stadium in New Delhi wore a deserted look on Thursday, the opening day of physical ticket sales. (Photo: Asian Age)

New Delhi: Falling online demand, and a poor response at the counter marked the opening day of physical ticket sales in New Delhi for the U-17 World Cup at the Jawaharlal Nehru Stadium on Thursday.

World governing body Fifa agreed to amend the match schedule to shift India’s group matches from Mumbai to the Capital, acting on a request from the All India Football Federation.

But the move has been barely justified so far, considering the low demand here, which is lagging markedly behind the other host venues like Kolkata, Guwahati and Kochi.

Reports suggest about 20 per cent of tickets have been sold online so far. And only 15-odd tickets were booked in the first two hours at the stadium’s lone ticketing counter, located at gate no. 15 on Thursday. The counter, named “Ticket Box Office”, was deserted during the morning phase, with little sign of picking up pace later in the day.

Delhi will host eight matches from the tournament’s opening day on October 6 to October 16, including all three of India’s group matches.

The hosts are clubbed alongside Ghana, Colombia and USA in a tough Group A, playing all their first round matches at the 58,000-seater JLN, beginning their campaign against the Unites States on Matchday 1.

“No specific amount of tickets have been provided for manual sales. Ten tickets were booked in the first hour. For Matchday 1, cumulative tickets of around `12,000 have been sold so far,” a person manning the counter told this paper.

Without any promotional billboards or placards around the stadium’s premises, the counter, reeking of toilet smells, and adjacent to makeshift relieving spots, are not easy to locate.

With 14 days to go before kick-off, awareness levels of people are still low, with a couple of passers-by even seen asking what event the tickets were being sold for.

The handful who bought tickets only received a confirmation printout of their booking. They will be asked to collect tickets later through SMS and e-mail. The manual hand-over will start from October 25, which compels buyers to visit the stadium twice to get possession of the tickets.

“If one has to come to the stadium twice to get hold of tickets, what is the purpose of the counter?” wondered Vikrant Tyagi, after receiving a confirmation printout for buying Category 4 tickets on Thursday. Counter salespersons though hoped demand would “pick up” as the tournament approaches.

Tournament director of the Local Organising Committee Javier Ceppi earlier said he expected demand at the Capital to be higher.

Colombia arrive
Meanwhile, Colombia on Thursday became the first team to arrive for the tournament. Coach Orlando Restrepo expres-sed confidence in putting up a good show. “We are delighted to be here. We are looking forward to a competitive tournament where we will put our best foot forward,” Restrepo said.