Liverpool bows down 2-1 to Sevilla in Fenway friendly

Liverpool manager Juergen Klopp was furious at Joris Gagnon's outrageous kick at an on-rushing Larouci in the 76th minute. 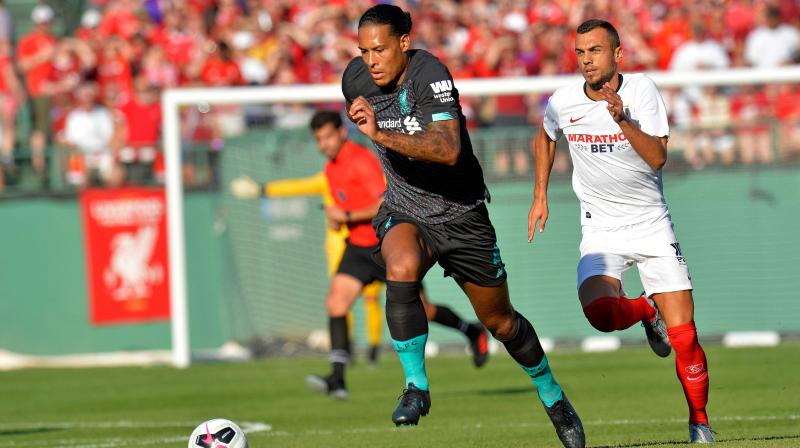 As in a 3-2 defeat to Borussia Dortmund on Friday in Indiana, there was some shaky defending from Liverpool. (Photo:AFP)

New York: Alejandro Pozo delivered the late dagger in 10-man Sevilla's 2-1 friendly win over Liverpool in Boston, a defeat made worse for the European champions when they saw Yasser Larouci stretchered off.

Liverpool manager Juergen Klopp was furious at Joris Gagnon's outrageous kick at an on-rushing Larouci in the 76th minute.

Gnagnon was shown a straight red card after sweeping one of the Frenchman's legs out from underneath him, toppling him to the pitch where his head bounced hard on the ground.

"(It's) much too early in the season to create headlines with saying the things I think about the situation," Klopp said at his post-match press conference, where he added that it appeared that the 18-year-old Larouci was "lucky" in terms of avoiding serious injury.

"But of course, how it always is with these things we have to wait a little bit. I don't know 100 percent. It looks like he was lucky but I only spoke quickly to the Doc and that's what he said, but we have to see."

Even with the La Liga outfit reduced to 10 men, Liverpool were unable find a way ahead, and Pozo sealed it in the 90th minute as he smoothly collected a pass from Munir El Haddadi, rounded Liverpool keeper Simon Mignolet and knocked the winner into an unguarded net.

Sevilla had enjoyed by far the majority of scoring chances on a sweltering evening at Fenway Park -- home of the World Series Champion Boston Red Sox. Both Liverpool and the Red Sox are owned by groups led by John W. Henry.

Players were granted water breaks in the hot, humid conditions, and even the pitch created on the baseball diamond received extra water during the match.

The pro-Liverpool crowd weren't treated to many of the club's stars as Brazilian internationals Roberto Firmino and Alisson were both absent for the Reds following their Copa America campaign along with Mohamed Salah and Sadio Mane, both missing due to the African Cup of Nations.

As in a 3-2 defeat to Borussia Dortmund on Friday in Indiana, there was some shaky defending from Liverpool.

Nolito's powerful shot in the 37th minute past Liverpool starting goalkeeper Andy Lonergan -- who was at Middlesbrough last season -- was Sevilla's reward after a half-hour of pressure.

It needed a sprawling save from Lonergan in the 13th minute to deny Luuk de Jong after Liverpool lost possession in their own territory and de Jong was just wide with a header in the 23rd.

Liverpool's equalizer came off a scrappy set piece as Trent Alexander-Arnold's corner was kept alive by Nat Phillips, the ball falling to an unmarked Divock Origi who swept in from close range in the 44th.

Both teams made wholesale changes at halftime, but even a match that was just one more step in both team's pre-season preparations there was nothing laid back about Sevilla.

A foul was called on Ever Banega for a hard tackle in the 12th minute and when he slammed the ball to the ground in protest he was shown a yellow card.

Liverpool midfielder Harry Wilson took a smack to the face just before halftime -- an infraction that paled in comparison to that of Gnagnon -- who was arguing with the referee as Larouci received treatment.

"Harry got a knock on his jaw and a finger in his eye, so not too cool," Klopp said. "He should be OK as well but couldn't carry on as well."