Antoine Griezmann 'cried with joy' after he joined Barcelona

Griezmann scored 133 goals in 257 appearances for Atletico since he joined them in 2014 from Basque club Real Sociedad. 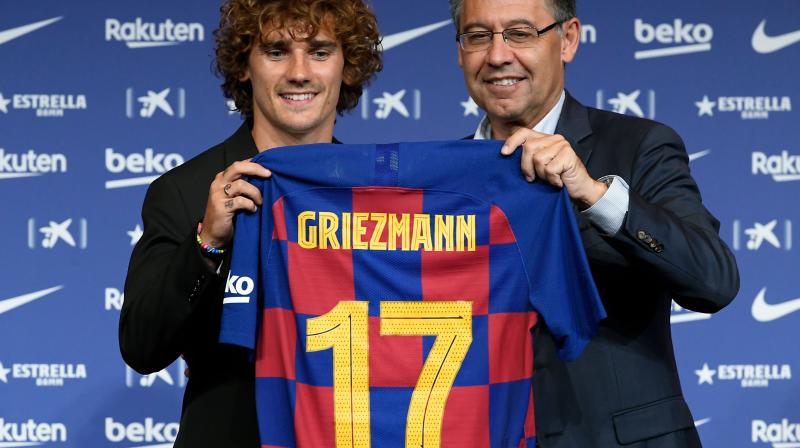 The World Cup winner, ANtoine Griezmann is in Tokyo with Barca ahead of a clash with Chelsea on Tuesday after the La Liga giants shelled out 120 million euros (USD 135 million) to match his release clause amid a blistering row between the player and the two clubs. (Photo:AFP)

Madrid: Antoine Griezmann admitted on Sunday that he was moved to tears of happiness when his big-money move to Barcelona finally came through after a controversial exit from former club Atletico Madrid.

The World Cup winner is in Tokyo with Barca ahead of a clash with Chelsea on Tuesday after the La Liga giants shelled out 120 million euros (USD 135 million) to match his release clause amid a blistering row between the player and the two clubs.

"I called my father and I started crying with joy because the transfer was all done, it all was over," Griezmann said in an interview with sports daily Marca.

"I was with my friends, with my wife, with my children and it was an incredible moment."

The 28-year-old added he was targeting European glory with Barcelona after two humiliating exits for the Catalans from the Champions League in the last two years -- to Roma and Liverpool -- after throwing away commanding first-leg leads.

"If you ask the fans, they will tell you (they want to win) all three titles (La Liga, Champions League and Copa del Rey), and that goes for the players and the leaders too, and me too," he said.

"We have a team to win everything. It's difficult but we will have to work for it."

Shortly after Barca had announced the signing of Griezmann, Atletico complained they and the Frenchman had negotiated the deal before the buy-out price dropped from 200 million euros at the start of July, adding that they had already "begun appropriate procedures" to defend their "rights and legitimate interests".

Spanish media claim that Atletico will go to FIFA to argue that Barca owe them more than the fee they eventually paid earlier this month.

Griezmann almost signed with Barcelona a year ago but instead opted in June 2018 to sign a new five-year deal at the Wanda Metropolitano.

But in May this year he announced he would be leaving at the end of the season, with Atletico claiming he told them of a deal with Barca before a 3-0 defeat to Juventus which dumped them out of the Champions League at the last 16 stage.

Griezmann scored 133 goals in 257 appearances for Atletico since he joined them in 2014 from Basque club Real Sociedad, who scouted the attacker when he was just 14.

He helped Atletico lift the Europa League in 2018 and won the World Cup with France last year. He was top scorer at Euro 2016 despite hosts France losing in the final to Portugal.