However Mourinho warned that the transfer spending of other Premier League teams made it imperative that United strengthen their squad further. 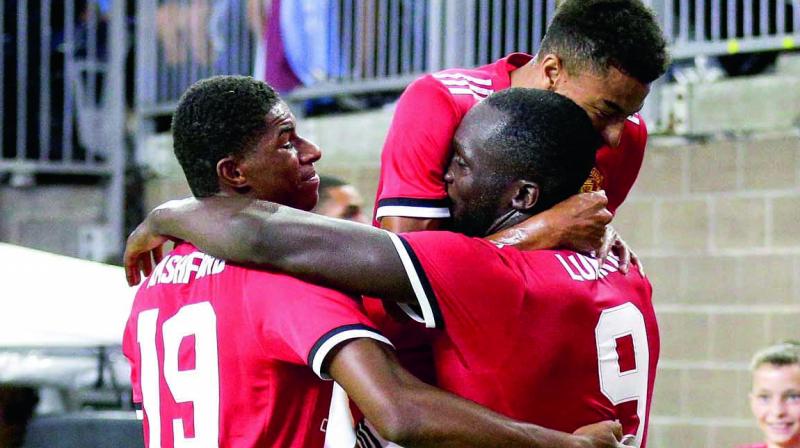 Houston: Jose Mourinho urged Manchester United bosses to wrap up the club’s transfer business as quickly as possible after watching new signing Romelu
Lukaku find the net once more in a 2-0 win over Manchester City on Thursday.

Lukaku, who joined United last week from Everton in a British record transfer, bagged his second goal in as many starts while teenager Marcus Rashford also scored in the win at Houston’s NRG Stadium.

Afterwards a satisfied Mourinho expressed delight with the way that Lukaku and fellow new recruit, defender Victor Lindelof, had settled in at the club.

But the Portuguese manager, who wants to sign at least one more player before the window closes next month, said he hoped further transfer deals could be completed rapidly.

“When I look to the team and Lukaku, Lindelof, I would like my squad to be here, my whole squad,” Mourinho said. “If you manage to get one more player - I’m not even crying for two - if we get one player, as soon as possible.

“Because we can see Lindelof is in a team, Lukaku is in a team. The understanding between the players, the Paul (Pogba) pass, the way Lukaku holds the ball.”

However Mourinho warned that the transfer spending of other Premier League teams made it imperative that United strengthen their squad further.

“We need a bit more and when you see the other teams in the Premier League, the way they get players and good players and you see the champions (Chelsea) buy three fantastic experienced players, City go to the market, Liverpool and West Ham gets Joe Hart, Chicharito and Arnautovic.

“West Ham, wow! They play to win the Premier League too. So the teams are fantastic in the market and I’m waiting for a bit more.”

United face two more matches in the United States before heading back to Europe, with a game against Real Madrid in Santa Clara on Sunday followed by a game against Barcelona in Maryland next week.

“Ten days of work, two more matches here in USA and then we go to Europe,” Mourinhosaid. “But I am happy with everything, the social life of the team is really good, fantastic people in the group, the new guys arrive and are at home and settled in immediately.”