Sports   Football  22 May 2019  'I must respect his decision', says Unai Emery on Mkhitaryan not playing UEL final
Sports, Football

'I must respect his decision', says Unai Emery on Mkhitaryan not playing UEL final

Mkhitaryan’s participation in the match had been in doubt due to the ongoing conflict between Azerbaijan and his native country. 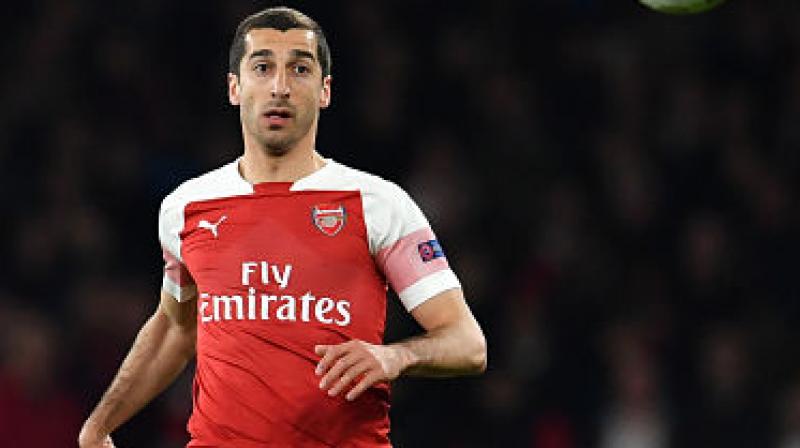 Mkhitaryan has played 11 games during Arsenal’s Europa League campaign this season and his absence will be a blow for the club, who need to lift the trophy in Baku in order to qualify for next season’s Champions League. (Photo: AFP)

Armenia international Mkhitaryan’s participation in the match had been in doubt due to the ongoing conflict between Azerbaijan and his native country.

Arsenal had been working with UEFA over securing their player’s welfare but the club said they agreed collectively with Mkhitaryan that he would not be in their squad for the May 29 final.

“It’s bad news, but we cannot do anything for this issue,” Emery told reporters on Tuesday.

“I spoke this morning with Mkhitaryan. It’s a very personal decision. He wants to play and to help us, but they spoke, both family and him, and decided to not go... I cannot push him to come with us.

“I don’t understand the political problems but I must respect (his decision).”

UEFA said a “comprehensive security plan” was in place to ensure Mkhitaryan’s safety in Baku.

“Working alongside Arsenal FC, UEFA sought and received assurances regarding the player’s safety in Azerbaijan from the highest authorities in the country,” European soccer’s governing body said in a statement.

“As a result of these guarantees, a comprehensive security plan was developed and given to the club. While the club acknowledges the efforts that UEFA and the Azeri government have gone to in this matter, we respect the personal decision not to travel with the player.”

The Association of Football Federations of Azerbaijan (AFFA) said in a statement that it saw no reason for the decision.

“We very much regret this unwarranted decision taken, as we understand, collectively by Arsenal, the player and his family,” the AFFA said.

The statement added that Azerbaijan had provided all the necessary guarantees required by UEFA to ensure Mkhitaryan’s safety.

“There is no reason whatsoever to put in question the seriousness of these guarantees provided by Azerbaijan. Over the past decade a large number of Armenian athletes have taken part in various international sports events in Azerbaijan without any issues,” the AFFA said.

Mkhitaryan has made 39 appearances for Arsenal in all competitions this season, scoring six goals. The 30-year-old won the Europa League crown with Manchester United in 2017.

“It’s the kind of game that doesn’t come along very often for us players and I must admit, it hurts me a lot to miss it,” he wrote on Instagram.

“I will be cheering my team mates on! Let’s bring it home.”

Mkhitaryan has played 11 games during Arsenal’s Europa League campaign this season and his absence will be a blow for the club, who need to lift the trophy in Baku in order to qualify for next season’s Champions League.

“He’s a big miss for us of course, because he is a really important player,” Arsenal defender Stephan Lichtsteiner added.

“But we understand his decision because it is dangerous for him. We’ll miss him a lot because he is very important for our team.”

Arsenal expressed their disappointment last week over the selection of Baku as the host city for the showpiece event, given the logistical problems faced by supporters for a near 6,000-mile round trip from London.