It was a match that Mohun Bagan should have won by a bigger margin had Nikhil Kadam and Akram not bungled clear opportunities. 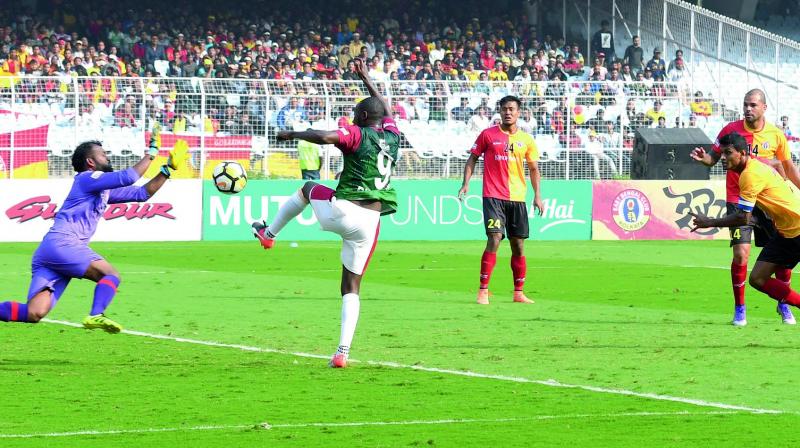 Mohun Bagan’s Dipanda Dicka (centre) in action against East Bengal in their I-League match at the Salt Lake Stadium in Kolkata on Monday. Bagan won 2-0.

Kolkata: Criticised for being profligate inside the 18-yard box, Dipanda Dicka stepped up his game when it mattered the most with two brilliant goals, as Mohun Bagan outclassed East Bengal 2-0 in a much-anticipated I-League derby here on Sunday.

Written off in the run-up to the high-voltage fixture because of their prolonged slump, a beleaguered Mohun Bagan found a star in Dicka, who showed his predatory skills with a couple of volleys out of top drawer as East Bengal’s hopes of winning the league almost went up in smoke.

Mohun Bagan jumped two places to be fourth in the standings after their dominating finish and they have 16 points with a match in hand against East Bengal, who slipped to third with 19 points from 10 outings.

It was a match that Mohun Bagan should have won by a bigger margin had Nikhil Kadam and Akram not bungled clear opportunities.

The Cameroonian struck the first one with a snap volley in what was one of the fastest goal of the season in the opening minute while the second one (34th) was a treat to the eyes as his acrobatic volley thundered into the back of the net. This was East Bengal’s second loss of the season and both have come against their bitter foes.

It was a ruthless show by Bagan as the Khalid Jamil-coached side hardly had any chance and had a momentary joy in the 27th minute when Katsumi Yusa speared in a perfect delivery for Willis Plaza to head it in.

Churchill, who are lying at second-last spot in the 10-team event, made a host of changes in the new year romping in four foreigners in a bid to rekindle their struggling form.

And Churchill now look a settled side as they remained unbeaten in their last three matches but still are three points below Indian Arrows, who are placed seventh.