FIFA World Cup 2018: Mbappe strike does the trick for France

France led 1-0 at halftime after Mbappe knocked in an Olivier Giroud shot that was deflected by a defender in the 34rd minute. 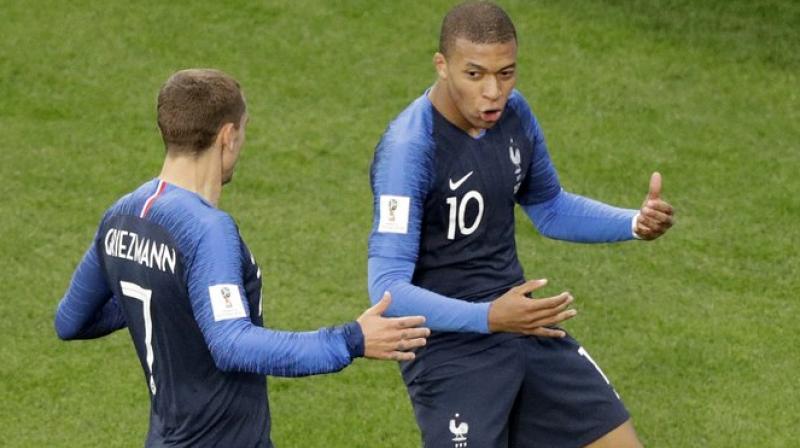 France’s Kylian Mbappe celebrates after scoring the opening goal with teammate France’s Antoine Griezmann, left, during the group C match between France and Peru at the 2018 soccer World Cup in the Yekaterinburg Arena in Yekaterinburg, Russia. (Photo: AP)

Ekaterinburg: Kylian Mbappe became the youngest World Cup scorer for France, aged 19 years and 183 days as his opportunistic strike was enough for them to beat Peru 1-0 and wnsure qualification in the round of 16.

France led 1-0 at halftime after Mbappe knocked in an Olivier Giroud shot that was deflected by a defender in the 34rd minute.

With their second successive defeat in group C, Peru were eliminated from the World Cup.

The Peru fans outnumbered the French in the arena in Yekaterinburg and their team sought to use any opportunity to pressure France.

Striker Paolo Guerrero had the best chance for Peru in the 31st after collecting a pass from Christian Cueva but France goalkeeper Hugo Lloris saved his low shot from close range.

Still, France appeared to be the more dangerous team. Lucas Hernandez had a shot blocked by goalkeeper Pdro Dallese late in the first half. Earlier, Antoine Griezmann and Paul Pogba missed the target. France defeated Australia 2-1 in their first match while Peru were beaten 0-1 by Denmark.