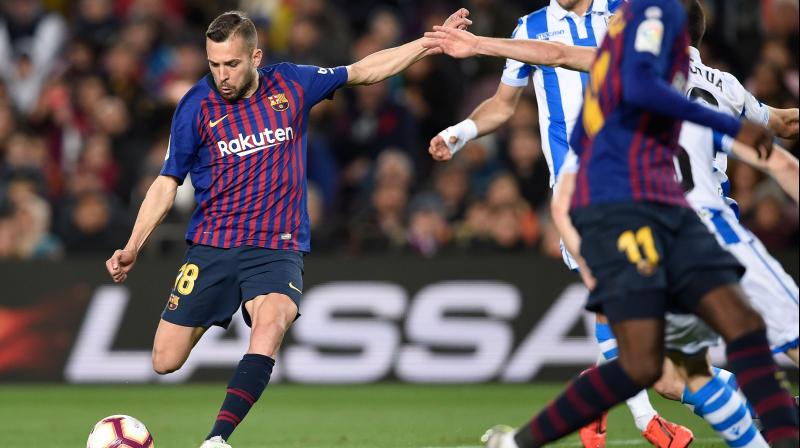 The Catalans will be crowned champions for the 26th time if they beat Alaves on Tuesday and Levante next Saturday. (Photo: AFP)

Barcelona: Barcelona closed in on the La Liga title on Saturday after earning a hard-fought 2-1 win over Real Sociedad at the Nou Camp, with goals from defenders Clement Lenglet and Jordi Alba restoring their nine-point lead at the top of the table.

Barca lead the standings on 77 points after 33 games, comfortably clear of nearest challengers Atletico Madrid who won 1-0 at Eibar earlier in the day.

French centre back Lenglet scored his first league goal for the Catalans to break the deadlock against the stubborn visitors right at the end of the first half with a crashing header from Ousmane Dembele’s corner.

Sociedad were rewarded for their intelligent display when forward Juanmi equalised in the 62nd minute, sliding in to meet an incisive pass from Mikel Merino and diverting it past Barca’s Marc-Andre ter Stegen.

But Barca hit back almost immediately when Lionel Messi picked out Alba, who did his best impression of the Argentine by cutting in from the left wing and producing a magnificent curling finish into the top corner.

The Catalans will be crowned champions for the 26th time if they beat Alaves on Tuesday and Levante next Saturday. They could clinch the title as soon as Wednesday if they win against Alaves and Atletico lose to Valencia.

Coach Ernesto Valverde had named three changes to the team that outclassed Manchester United 3-0 on Tuesday to reach the semi-finals of the Champions League and in the early stages it looked as if his side were still recovering from their exploits.

“Today was a little bit harder, we just made a huge effort (against United) but we tried to play the same way and in the second half we were a little better,” said match-winner Alba.

“The team is responding very well, we want to be champions as soon as possible. It seems very easy now because we have a big advantage but people need to appreciate the work we have done.”

Sociedad had given Barca an early fright in the corresponding fixture back in September before losing out and the Basques again held their own in the first half here.

They stifled Barca by sitting deep and outnumbering them in midfield and they should have taken the lead when Juanmi got a clear sight of goal, but he was denied by Marc-Andre ter Stegen and Willian Jose ballooned the rebound over the bar.

Barca became bolder as halftime approached and almost found a breakthrough through Luis Suarez, who was thwarted by an outstanding save from Sociedad’s Geronimo Rulli.

The Argentine keeper was powerless to stop Lenglet’s thumping header though, and there was also little he could do to prevent Alba putting Barca back in front so soon after Juanmi had deservedly pulled the visitors level.