At his ninth attempt, Messi scored against Chelsea halting his longest drought against any opponent. 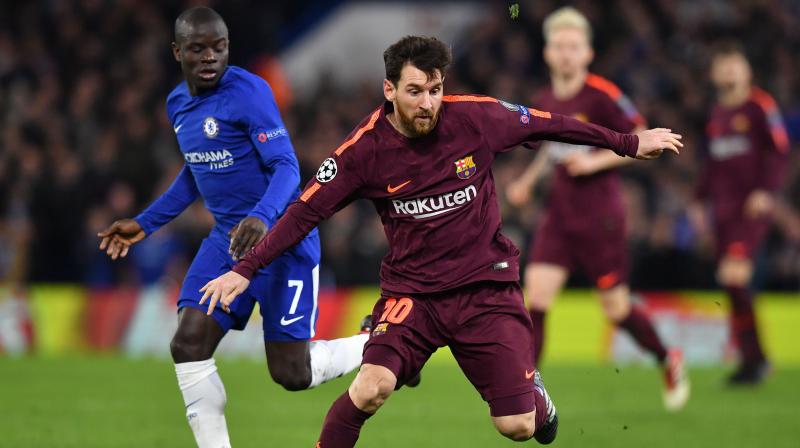 London: Lionel Messi finally managed one of the few things he had yet to achieve in football.

At his ninth attempt, the five-time world player of the year finally scored against Chelsea, salvaging a 1-1 draw on Tuesday and halting his longest drought against any opponent after 730 minutes.

By cancelling out Willian's opener, Messi also gave Barcelona a narrow edge in their Champions League round-of-16 matchup heading into the second leg at Camp Nou on March 14. The night's other game produced a far more conclusive outcome with Thomas Mueller and Robert Lewandowski both scoring twice as Bayern Munich beat 10-man Besiktas 5-0.

It was far tighter at Stamford Bridge, with Chelsea deploying Eden Hazard as a false nine and containing Barcelona's energetic pressing before being made to pay for a rare slip in concentration in the 75th minute.

Andreas Christensen passed laxly across his own penalty area and Barcelona capitalized. Andres Iniesta beat Cesar Azpilicueta to the ball, skipped past the defender's attempt to tackle and squared for the unmarked Messi to turn into the bottom of the net. It prevented Barcelona from slipping to only its second loss in all competitions since August.

"We lacked more clear-cut chances, but the good thing is we managed to force an error out of them and score an equalizer," Barcelona coach Ernesto Valverde said through a translator. "We go back to the Camp Nou happy."

Twice, though, Barcelona had gifted Willian the space to hit the post in the first half. It was third time lucky in the 62nd for Willian, who drifts in and out of the team but was the outlet of Chelsea's most dangerous moments against the Spanish leaders.

The Brazilian was left unmarked just outside the penalty area to receive a pass from Eden Hazard. Sergio Busquets charged forward to block Willian but ended up on flat on his back after Willian shimmied past him.

"We gave too much space to Willian to shoot," Valverde said. "The pass to him was perfect, the control was perfect. And we just had to get closer to him."

They didn't. Willian picked out a gap in the defense to send the ball into the bottom right of the night.

"We stayed compact, had a plan," Willian said, "and did exactly what we expected." But Chelsea couldn't hold on for the victory.

"We have to go there to attack and score because 90 minutes defending at the Nou Camp is an eternity, it is a suicide mission," Chelsea midfielder Cesc Fabregas said.