Having already booked their berth at the Euro 2020 finals on Saturday by beating Belarus. 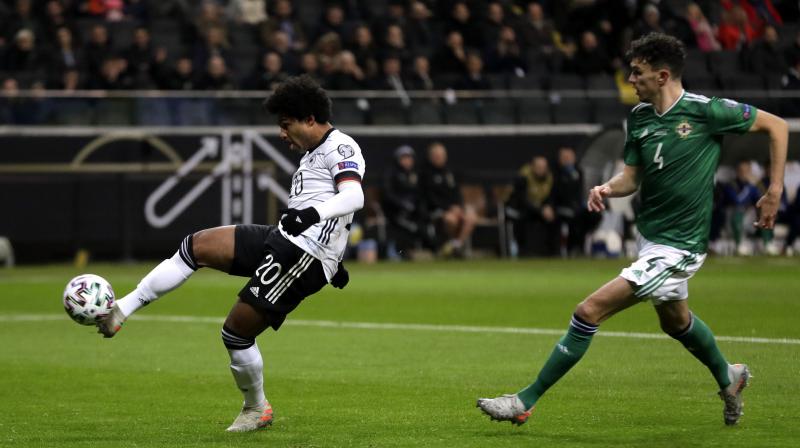 Serge Gnabry hit a hat-trick as Germany finished top of their Euro 2020 qualifying group after brushing Northern Ireland aside 6-1 on Tuesday. (Photo:AP)

Frankfurt: Serge Gnabry hit a hat-trick as Germany finished top of their Euro 2020 qualifying group after brushing Northern Ireland aside 6-1 on Tuesday.

Having already booked their berth at the Euro 2020 finals on Saturday by beating Belarus, the emphatic win in Frankfurt means Germany finish their qualifying campaign top of Group C ahead of the Netherlands.

The Dutch also qualified last weekend. Northern Ireland finish third and will go into the play-offs for the Euro 2020 finals.

Gnabry reached 13 goals in as many internationals as the Northern Irish were given a masterclass in finishing.

This was Gnabry's second hat-trick for Germany. He also scored three goals on his 2016 debut in an 8-0 mauling of minnows San Marino.

Gnabry also hit four goals in Bayern's 7-2 romp at Tottenham in the Champions League last month. Northern Ireland took a shock lead when a poor clearance header by Toni Kroos fell to Michael Smith who drilled home his shot from outside the area after only seven minutes.

He took a touch on the edge of the area before spinning and firing past Irish goalkeeper Bailey Peacock-Farrell on 19 minutes. The Germans went into the break 2-1 up after Goretzka poked the ball over the line via the upright on 42 minutes.

The former Arsenal winger slipped his marker and fired home after a good cross from wing-back Lukas Klostermann. The Germans were cruising and Gnabry claimed his hat-trick on the hour by holding off Irish centre-back Tom Flanagan before coolly slotting the ball home from a tricky angle.

Not to be out-done, Goretzka notched his second as yet another Germany move left the Irish defence clutching at straws. Northern Irish midfielder Paddy McNair intercepted a ball from Kroos, but knocked it only as far as Goretzka who picked his spot in the back of the net on 73 minutes.

With time almost up, Brandt completed the rout by finishing off a Kroos pass with the Northern Irish defence again exposed to delight home fans.