Ole Gunnar Solskjaer’s youthful line-up had earlier struggled to dominate their weakest opponents in the group despite having possession. 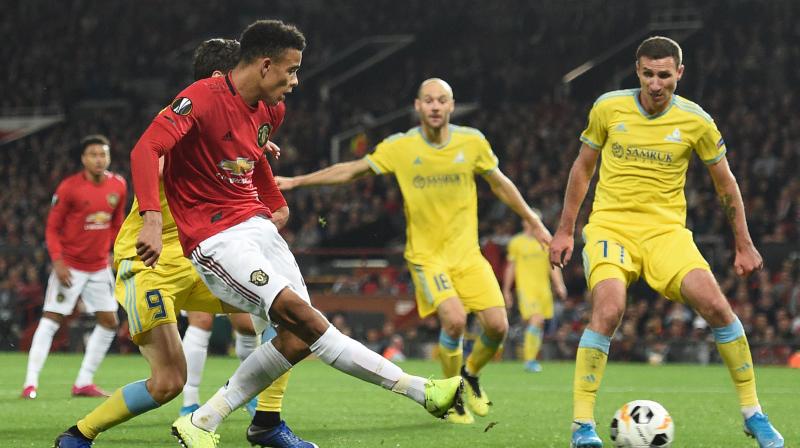 The prodigy slotted home through the keeper’s legs at the near post in the 73rd minute to make history in only his second start as the first player born in the 2000s to score a senior goal for the club.

Ole Gunnar Solskjaer’s youthful line-up had earlier struggled to dominate their weakest opponents in the group despite having plenty of possession.

United made nine changes to the side that started against Leicester City in the Premier League last weekend, with Nemanja Matic taking the captain’s role in the absence of Ashley Young and goalkeeper David De Gea.

They came close to scoring after three minutes when Fred’s powerful long-distance strike from smacked off the top of the crossbar.

Marcus Rashford missed another great chance 10 minutes later with a close-range shot straight at the goalkeeper.

“We made it hard for ourselves,” said Solskjaer, relieved at least to be leading Group L after Partizan Belgrade and AZ Alkmaar drew 2-2 in Serbia.

“It’s pleasing, though, that we got three points, got off to a decent start.

“In and around the box he (Greenwood) is one of the best finishers we’ve got and I’m happy he got his goal. I’m sure he’ll go home tonight and be happy with that one.”

While he partnered 21-year-old regular Rashford up front, teenagers Angel Gomes and Tahith Chong made their full debuts before being replaced by Juan Mata and Jesse Lingard respectively.

Lingard hit the post in the 80th minute and Diogo Dalot missed a sitter in front of 50,000 fans as United raised the tempo after going ahead but still looked short of creativity.

“It was a hard game. First half we tried to open the game and to score a fast goal but they had a solid defence,” Matic told BT Sport.

“It’s good for the (young players) to have the opportunity to play these games. They have to use that, to work hard to get more chances.”