It’s the philosophy that matters

FC Pune City welcomes new coach in the form of Miguel Angel Portugal, as they aim for a better season. 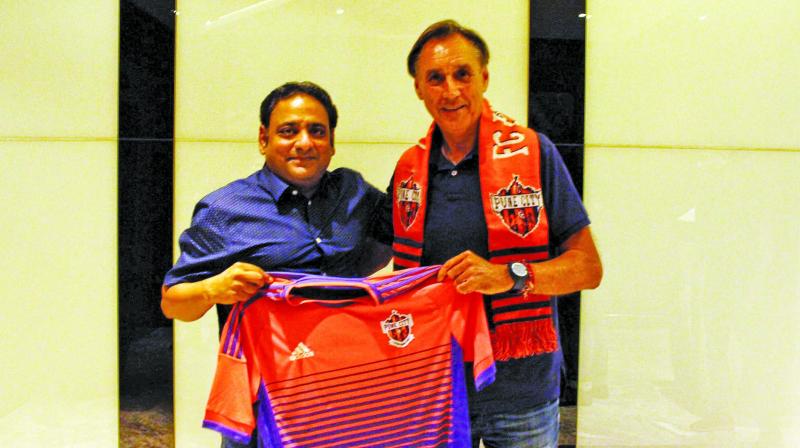 The vacation is over; the new coach has arrived and the lads are back on the field. FC Pune City are out and shining for the upcoming Indian Super League season. A three-month-long break for the players has come to an end with new head coach Miguel Angel Portugal.

It’s a new dynamic in the football world of sacking and appointing managers in the duration of one or two seasons. However, previous coach, Ranko Popovic left the club in accordance to a mutual decision between him and the club. Unlike the past managers who lacked desire, producing fluctuating performances, the Serbian’s team had the charisma that took them to the playoffs. The Stallions were eliminated, but it was definitely a beginning.

Once a team learns to win, it is hard to let that slip. The departure of Ranko meant that there would be some instability in the camp but team CEO Gaurav Modwel denies this issue. He has been taking care of the team management closely from the first season.

Gaurav is an advocate of building a philosophy in the team and many clubs have gone by this idea. “I really credit Ranko for his tactics and strategies but at the same time, it was the team that we were building. If you see, our team was built under three crore rupees last year. We believe in youth and development of a system,” says Gaurav. Their most expensive pick from the draft was Chhuantea Fana for `45 lacs.

Also, most of the squad comprised   youngsters promoted from the youth system. What worked well for Pune was Ranko’s ideology. Even he believed in making the most of what is available and that is what Gaurav wanted.

The CEO believes that this is what the new coach Miguel Angel needs to keep in mind. “Of course he has the knowledge of everything that we believe in. It will take time for us to see what he wants,” he says talking about the Spaniard’s arrival.

It was a completely new team that was donning the orange and purple colors of FC Pune City in the 2017/18 season. The defenders were new, the midfield was fresh and so was the attack. The academy played its part. Sahil Panwar was one of the results. He cemented his place as the left back in the Pune team. “This will be our policy throughout. We have retained the majority of our squad and a couple of new players are coming in,” says Modwell as the training is underway in Pune.

FC Pune City always indulges in the fascinating pre-season tour. They were the first ones to have abroad outings before the ISL started,  but soon the club realised it was only hampering the cause. “That is not ideal for football in India. In that much money, we can easily develop facilities here and use them whenever we want,” says Gaurav.

He also informs that this time the senior team will start their campaign in Goa at the Awes Cup. Unlike previous seasons when the junior team was representing FC Pune City in the tournament, this time the senior boys will enter the competition. It hosts a mix of clubs from ISL, I-League, and local Goan teams.

The new coach Miguel Angel has managed Real Madrid B and Real Madrid C. In La Liga, he has been in-charge of Valladolid. And was also handling Delhi Dynamos last season.