However, pressure paid off as Quintero’s low free-kick flew under Japan’s wall and crept inside the post shortly before half-time. 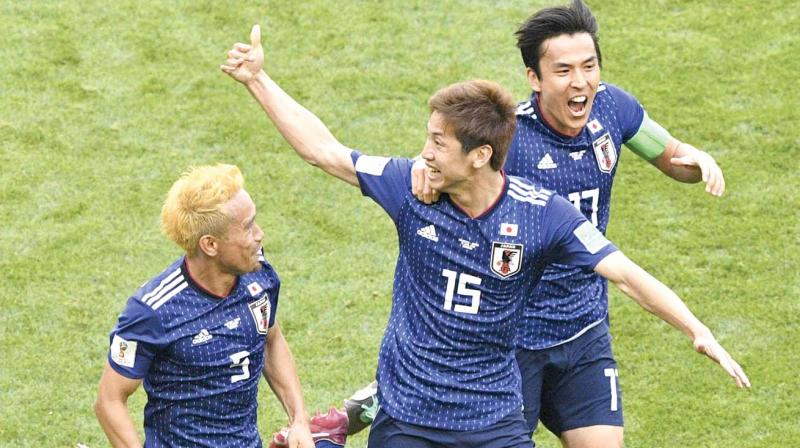 Saransk: Yuya Osako exacted sweet revenge for Japan on Tuesday as the Blue Samurai beat Colombia 2-1, becoming the first Asian side ever to beat a South American team at the World Cup.

Osako’s 73rd-minute winner meant the Japanese avenged their 4-1 mauling in the group stages of Brazil 2014 as Colombia played with a man down for 86 minutes.

In an explosive start to the Group ‘H’ clash, Colombia defender Carlos Sanchez earned the first red card of the tournament with a handball after just four minutes.

Japan took a shock lead when Shinji Kagawa netted the resulting penalty before Juan Quintero equalised with a free-kick for Colombia to make it 1-1 at half-time.

Brazil 2014 topscorer James Rodriguez came on for the last half-hour after labouring in training with a calf strain but could not pull his side level after Osako’s goal.

When Osako fired in a shot from Japan’s first attack, Sanchez blocked the effort with a raised arm. Referee Damir Skomina showed him a straight red card after pointing to the spot without referring to Video Assistant Referee.

The Colombians bitterly protested but Kagawa drilled home the spot kick to put Japan ahead in the sixth minute.

It was the second-fastest red card in World Cup finals history, bettered only by the 52 seconds it took Jose Batista of Uruguay to be sent off against Scotland at Mexico ’86.

However, pressure paid off as Quintero’s low free-kick flew under Japan’s wall and crept inside the post shortly before half-time. The goal was confirmed by goal-line technology.

Japan pressed after the break, forcing Colombia goalkeeper David Ospina into a string of saves. The pressure paid off when Osako, who was a constant menace to the Colombia defence, leapt highest from a corner and guided his header in off the post with 17 minutes to go.