Few big teams need to sweat the 2020 European Championship qualifiers, but for Germany the pressure is already on. 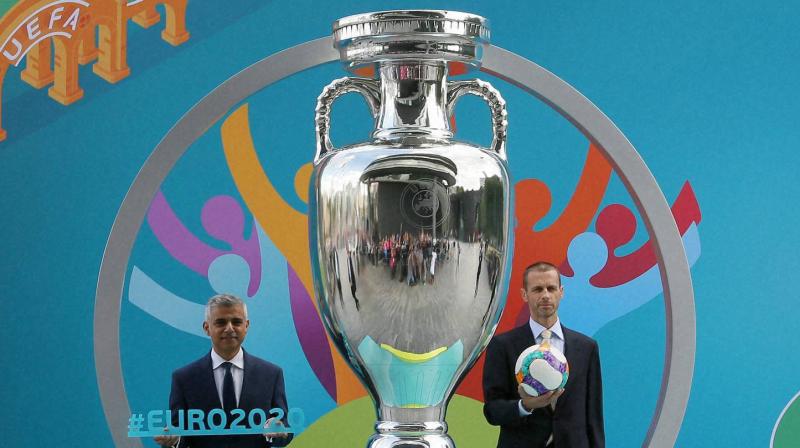 After a terrible 2018, Joachim Loew's new-look squad is aiming for revenge against the Netherlands, which helped relegate Germany in the inaugural Nations League last year. (Photo: AP)

Few big teams need to sweat the 2020 European Championship qualifiers, but for Germany the pressure is already on. After a terrible 2018, Joachim Loew's new-look squad is aiming for revenge against the Netherlands, which helped relegate Germany in the inaugural Nations League last year. Elsewhere in the opening two rounds of games, there's a rematch from the 2016 European Championship as World Cup champion France hosts Iceland on Monday in Group H. England's young squad faces two eastern European teams in the Czech Republic and Montenegro in Group A.

Qualifying for next year's 24-team tournament is low-risk for many top teams, since two nations qualify from each of the 10 groups. The revamped playoff system means 16 countries have a safety net.
In other matches, World Cup semifinalist Belgium hosts Russia in the pick of the opening day's games Thursday. Portugal faces on-form Ukraine on Friday and on Saturday Spain is against Norway and out-of-sorts Italy hosts Finland.

SOUTHGATE'S YOUNGSTERS
England manager Gareth Southgate is relying on young players even more than usual as qualifying begins.
His squad for the Czech Republic on Friday and Montenegro on Monday contains two players born in 2000 - Jadon Sancho and newcomer Callum Hudson-Odoi - and just one born in the 1980s, backup goalkeeper Tom Heaton.
Declan Rice, the 20-year-old West Ham midfielder, is available to make his England debut after switching allegiance from Ireland.
Of the older players from the England squad which reached the World Cup semifinals, Jamie Vardy and Gary Cahill have retired from international football, while Ashley Young hasn't been selected since the tournament in Russia.
The Czech squad is missing first-choice goalkeeper Tomas Vaclik, who has an abdominal muscle injury, and playmaker Borek Dockal is a doubtful starter because of a calf muscle problem.

LOEW'S WOES
Few international coaches have Loew's staying power. He is still in charge despite Germany failing to advance from the group stages at the World Cup and the Nations League groups, and recording just one win in its last seven competitive games. Germany's first European qualifier on Sunday is its toughest - away to the Netherlands, which beat Germany 3-0 in Amsterdam in October. "Some players now have to take the next step and take it up a level," Loew said when he introduced a revamped squad that was missing Bayern Munich trio Thomas Mueller, Mats Hummels and Jerome Boateng. That leaves captain Manuel Neuer and Toni Kroos as the only prominent survivors from the squad that won the 2014 World Cup in Brazil. Netherlands, meanwhile, is on a high after winning its Nations League group from France and Germany. The Dutch are also celebrating Ajax's Champions League win over Real Madrid. Four players from that Ajax team could face Belarus on Thursday and then Germany, including young stars Matthijs de Ligt and Frenkie de Jong.

HOSTS MUST QUALIFY
To mark 60 years of the European Championship, the final tournament spreads out across 12 countries from Ireland to Russia, a legacy of Michel Platini's time as UEFA president. If all the hosts were given spots at the tournament, they'd make up half the draw. That makes 2020 the first European Championship in 44 years where hosts must qualify. Some will miss out.
Azerbaijan faces the toughest task in having to win a qualifying spot in Group E ahead of Croatia and Wales, while fellow hosts Hungary and Scotland aren't exactly regulars at major tournaments, either. Among the big-name hosts, Italy and Germany need to shake off poor recent form to reach the finals. England is the main host with seven games at Wembley, including the 2020 semifinals and final.

SAFETY NET
Some teams already know they'll get a second chance thanks to UEFA.
The top two teams in each group qualify automatically, just as they did for the 2016 tournament, but the playoff system is very different. Playoff places are decided by how well teams performed in last year's Nations League games. England and Portugal are among the 16 teams currently in playoff places, along with lesser lights such as Georgia and Belarus. If a team with a playoff spot qualifies automatically, that spot goes to the next-best ranked team in the same Nations League tier. For example, Belgium goes to the playoffs if it doesn't qualify automatically but at least one of Switzerland, Portugal, the Netherlands and England does. The playoffs are in March 2020.