For TC Sports Club, who are making their debut in the competition, Anatolii Vlasi-chev will once again need to fire on all cylinders. 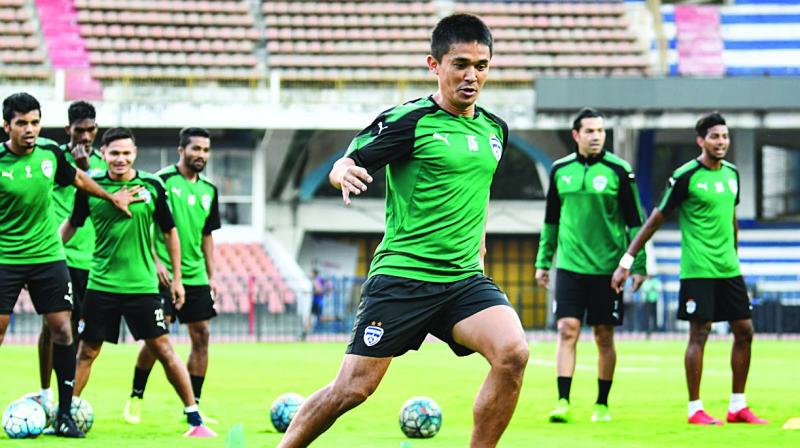 Sunil Chhetri at a training session in Bengaluru.

Bengaluru: Following a 3-2 win on the road in the first leg, Bengaluru FC are poised to seal qualification into the group stage of the AFC Cup 2018 ahead of their second leg South Asian play-off second leg against Maldives side TC Sports Club at the Sree Kanteerava Stadium here on Tuesday.

A Thongkhosiem Haokip brace and Erik Paartalu’s goal gave the Blues three vital away goals to bring back home, and the visitors will at the very least need to win by two goals (without conceding), or conversely by three or more goals to feature in Group E of the competition.

With all the goals coming in the second half of a frenetic tie that was set against the backdrop of a political crisis in Male, BFC manager Albert Roca knows that while his side do have home advantage, there is still work to be done to kill off the contest.

“This tie is far from over. Yes, we’ve scored three away goals but we’ve also conceded two and I don’t see why they won’t take the game to us. That said, we are always confident of our abilities and more so at home. We need to focus and get the job done,” said the Spaniard.

For TC Sports Club, who are making their debut in the competition, Anatolii Vlasi-chev will once again need to fire on all cylinders.

The attacking Kyrgyz midfielder scored a hat-trick in the previous round of the qualifying stage, aside from pulling one back in the first leg last week.