Sports   Football  20 Jan 2018  Happy with the players we have: Guimaraes
Sports, Football

Happy with the players we have: Guimaraes

Mumbai City coach admits they didn’t have the accuracy to finish better in the 1-3 loss to Bengaluru FC. 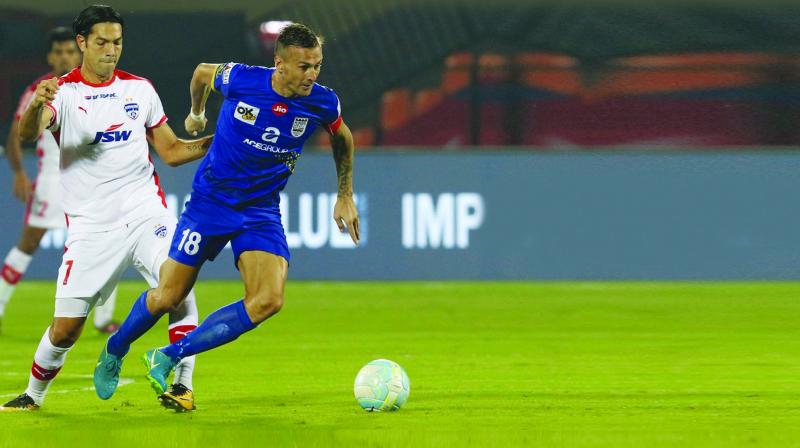 Scene from an enthralling encounter between Mumbai City FC and Bengaluru FC.

Mumbai City missed a genuine striker against a quality team like Bengaluru FC on Thursday night again, and ended up losing the game 1-3. However, Mumbai City coach Alexandre Guimaraes ruled out any addition of a striker to the squad in the January transfer window.

Mumbai City had control of the game in the first half, and created many chances with Achille Emana leading the way in the mid-field. But striker Balwant Singh messed up three chances before conceding a penalty.

He pushed Chhetri from behind inside the box to concede a penalty in the 43rd minute, and the hosts lost grip from there. Balwant had just escaped with a yellow card after elbowing Harmanjot Khabra.

“We did good in the first half. It was an open game until we got in a situation of (conceding) penalty and later conceded the second goal, at the start of the second half. It became difficult for us; they managed the tempo well, we had to take risks and got a good reaction which had a key effect on the game,” the Costa Rican coach said.

Guimaraes admitted that they missed scoring opportunities on Thursday. “We didn’t have the accuracy to finish better and capitalise on an advantage after reaching their area.  I won’t be looking for attacking options in the transfer window. We will have the players that we have now,” he asserted.

It was Mumbai City’s second consecutive home loss and they remain stranded on 14 points, with seven more games to play. Considering they’ve won three games at home out of their overall four wins so far, the Mumbai gaffer will have a tough ask in hands to prepare his boys for next away fixture, against currently fourth placed FC Goa. The latter team have two games in hand compared to Mumbai City. The match is on January 28, so they have time to rethink their strategy.

“The next 48 hours are important for us. Many of our players have a few injuries after back-to-back games and we will see how they react. It is important to recover physically after the last two games and move forward. After that we will start preparing for our trip and game against Goa,” he said.

The Bengaluru FC coach Albert Roca, however, was happy with the clinical performance of his team, after their  shock defeat to bottom placed Delhi Dynamos in the previous game. “I am really happy to turn things around after that disappointing loss. My team was better, we did our job well. We had managed situations well till penalty and were superior from the beginning.

Roca however felt it wasn’t easy against Mumbai City. “We were playing focused and they were suprised. We took control of the game step by step and after goal it was easier. They tried hard, the injury to Raju (Gaikwad in 30th minute) when he had to be replaced didn’t help them. We tried to take advantage to that situation by shifting positions in midfield and put pressure on them (from the left flank),” he said. 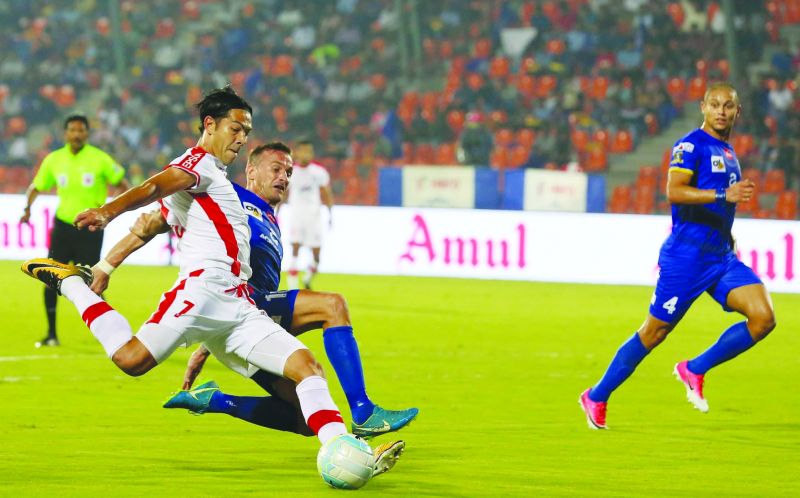 The Sunil Chettri-Diego Forlan combination worked wonders for Mumbai City FC in the last season, as the team finished on top of the league standings before losing in the semi-finals. This season, Forlan didn’t come to India and Chhetri decided to play for his I-League club Bengaluru FC, who are playing the Indian Super League for the first time and have made an instant impact. Mumbai have missed strikers of their quality badly so far.

Chhetri had vowed to not to celebrate if he scores against Mumbai City at the players draft before the season. The talismanic Indian skipper made Mumbai City pay in the first game in Bengaluru by scoring a goal in a 2-0 win and he twice got past his former Bengaluru FC teammate Amrinder Singh on his return to Mumbai on Thursday to star in Bengaluru FC’s 3-1 win to go top of the standings.

But he continued to be muted in his celebrations as a gesture of respect towards his ex-club and Mumbai fans. He also consoled Amrinder right after the game. The 33-year-old acknowledged that the West Block Blues fans, who are travelling with the team, have helped in keeping their spirits up through the game.

“The boss asked us for a reaction before today’s game and I think we got the job done. Thrilled with the performance and the vibe in the dressing room!” he commented after the match.