In a hard-fought encounter, Tlang scored in the 60th minute to help Shillong Lajong secure their third win of the season. 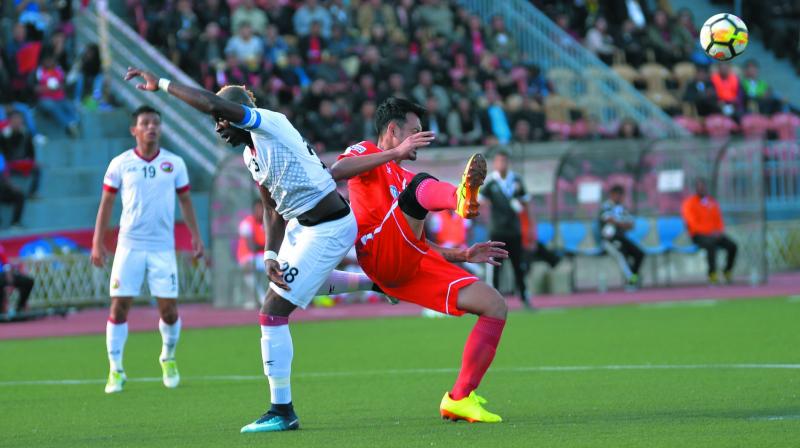 Action from the I-League match between Aizawl FC and Shillong Lajong in Aizawl on Monday. The visitors won 1-0.

Aizawl: Winger Redeem Tlang scored the solitary goal as Shillong Lajong snapped the unbeaten run of Aizawl with a 1-0 win in the first Northeast Derby of the I-League season here on Monday.

In a hard-fought encounter, Tlang scored in the 60th minute to help Shillong Lajong secure their third win of the season.

The win gave Lajong much-needed three points as they moved to second place on the league table. They are equal on points with Minerva Punjab FC but have played one game more than the league leaders.

The teams found it hard to carve out scoring chances and just after the half hour mark, Yemen midfielder Al-Hagri danced past Aizawl’s Saighani and Kareem but his weak shot was collected by goalkeeper Avilash Paul.

Al Hagri got a gem of a chance but again poor finishing let the team down.

The teams were more organised in the second half and the visitors made more of their chances to take the lead. Al Hagri’s shot inside the box was blocked by the Aizawl boys but the ball fell to Tlang, who slotted it home for his second goal this season.

Injury-hit Bagan eye win over Neroca
Grappling with injuries, Mohun Bagan will be desperate to return to winning ways when they face debutants Neroca FC at the Salt Lake Stadium in Kolkata on Tuesday.

Star Haitian forward Sony Norde and Ansumana Kromah, who sat out in their 1-1 draw against Shillong Lajong, are still carrying niggles and remain doubtful starters, while Arijit Bagui and Azharuddin Mallick have been ruled out.

Defender Kingsley Eze Obumneme is serving a suspension after his red card against Shillong and coach Sanjoy Sen will have his task cut out against the debutants who are fresh from wins against Chennai City and Gokulam FC.

Churchill had a disastrous start this season, having lost all their four matches so far.

They were unlucky not to collect a point in their previous match as Willis Plaza’s stoppage time goal saw East Bengal collect full points.

Churchill coach Alfred Fernandes said they could bounce back.