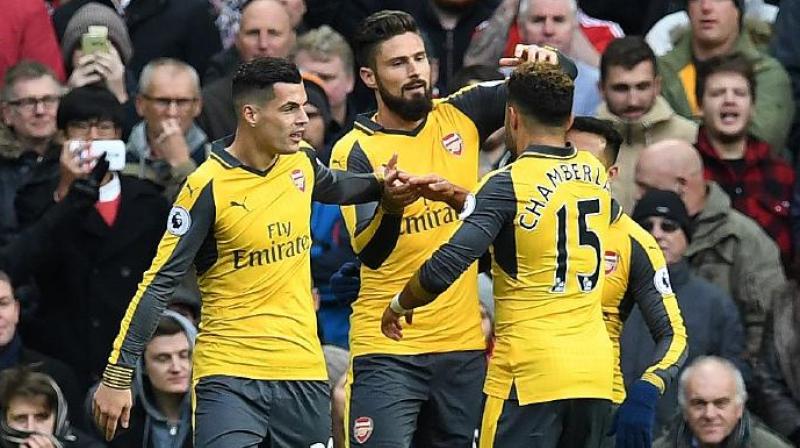 Manchester: Olivier Giroud scored an 89th-minute equalizer as Arsenal snatched a 1-1 draw at Manchester United despite being outplayed in a disappointing Premier League match between two English heavyweights on Saturday.

In a rare attack by the visitors, Alex Oxlade-Chamberlain reached the byline and crossed for his fellow substitute to head home at the far post with Arsenal's first effort on target all match.

Juan Mata's 68th-minute goal put United ahead, the Spain playmaker meeting a right-wing cut-back by Ander Herrera with a low, first-time shot into the corner.

Arsenal manager Arsene Wenger's winless run in competitive meetings with rival coach Jose Mourinho extended to 14 matches, but the Frenchman will probably not be too concerned with that after seeing his side escape with a point.

It was a flat and all-too-familiar performance by Arsenal at Old Trafford. The Gunners have not won at United in the league since September 2006 and they barely created a chance until Giroud's goal.

Mourinho had been heading for his most important victory since arriving at United in the offseason, coming at a time when some have started to doubt his suitability to the job after the team's erratic start to the season.

Instead, United have now drawn its last three league games at home, two of them coming after conceding late goals.

"Very frustrating, to be honest," Mata said. "We were really close to winning the game. This is the Premier League ... they only needed one chance."

That fell to Giroud, who is starting to make a big claim for a starting place now he is fully fit following a delayed start to the season after the European Championship. The France striker, who has lost his place to Alexis Sanchez as Arsenal's lone striker, scored two goals off the bench in the last away game at Sunderland.

This fixture has provided plenty of drama down the years but there was little to get the crowd excited about here, with the teams' decision to field two defensive midfielders stifling much of the attacking play.

United had the better of the game, but only created half chances until Mata's goal.

Mata's future at United looked bleak after Mourinho was hired by United. Mourinho sold Mata to United in January 2014 when both were at Chelsea, then left the Spaniard distinctly unimpressed by substituting him in the Community Shield in August, soon after bringing Mata on as a substitute.

But Mata appears to be a central figure in Mourinho's plans at United, starting the last three games and then scoring his fourth goal of the season. He was given a standing ovation when he was substituted in the 85th minute.