The three-time champions will take on Germany in the quarter-finals at Kolkata on Sunday. 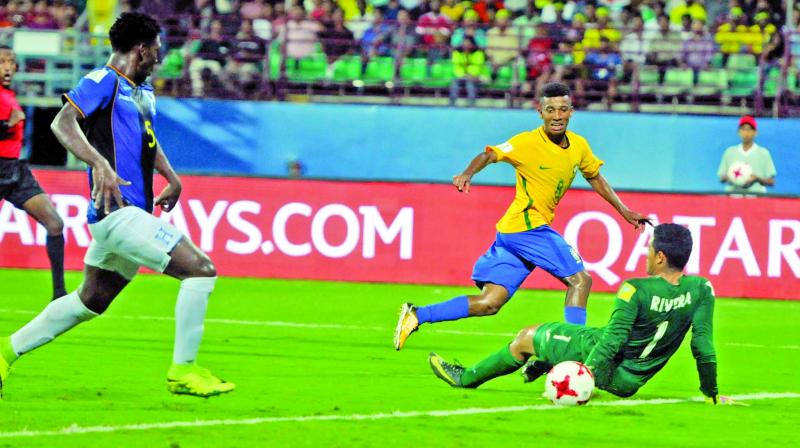 Brazil’s Marcos Antonio scores in their Round of 16 match against Honduras at the Jawaharlal Nehru Stadium in Kochi on Wednesday. Brazil won 3-0. They face Germany in the quarter-finals in Kolkata on October 22. (Photo: Sunoj Ninan Mathew)

Kochi: Brenner scored a brace as Brazil brushed aside Honduras 3-0 to reach the quarter-finals of the Fifa U-17 World Cup at the Jawaharlal Nehru Stadium here on Wednesday.

The Sao Paulo striker, who opened the scoring in the 11th minute, added a second on 56 minutes while Marcos Antonio joined the party with his first of the tournament shortly before half-time. The three-time champions will take on Germany in the quarter-finals at Kolkata on Sunday.

Honduras were unchanged from a 5-1 thrashing at the hands of France four days ago while Alan returned to replace an injured Vitinho, making the only change to Brazil’s winning team against Niger. Honduras coach Jose Valladares had said pre-match that their Brazilian date would be similar in complexity to that against the Europeans. While he claimed to have mended the cracks from four days ago it was merely a layer of wax, which melted in no time.

The Central Americans appeared to nullify the Brazilian inter-play with a similar 4-3-3 formation early on, but with Weverson and Wesley pushing up the wings the plan was thwarted even before it fell in place.

Victor Bobsin, at the heart of the Brazilian midfield, held the key to unlocking the Honduran defence that was always susceptible to flunking their own off-side trap as they did against France and Japan in the group stage.

Bobsin set off a series of passes that broke the deadlock. The Gremio holding midfielder’s long diagonal was chested down by Marcos Antonio on the run and fed to Alan.

It was the Palmeiras no. 10, likened to Spanish wizard Andres Iniesta, who applied the magical touch as he took the ball from Antonio, played a one-two with Wesley before laying it on a platter for Brenner, in space.

The Sao Paulo striker’s refined finish had Brazilian flair written all over it. Paulinho had a shot saved by Alex Rivera and Brazil continued to assert their influence on the game. Honduras found it difficult to create plays of their own and attempts to find Carlos Mejia wide left was cut off by a watchful Brazilian defence.

It required the cooling break for the Brazilian pressure to ease off a bit and Honduras were at the end of a rare chance.

Luis Palma thought he had his moment but his hopeful drive rattled the post to Gabriel Brazao’s relief in the Brazil goal. The Canarinha woke up and dallied no more and were rewarded with a second ten minutes later.

Paulinho’s through ball was read perfectly by Marcos Antonio, who fired a low drive past Rivera for his first goal in the tournament. The Atletico Paranaense midfielder was however guilty of missing a sitter later in the second half, which if converted was worthy of the goal-of-the-tournament.

As many as five Brazilian players had participated in the inter-play on the edge of the box but Antonio’s finish was poor.

Honduras replaced Patrick Palacios with Kenneth Martinez at half-time and the incoming striker displaced Mejia from the wing, allowing their leading goalscorer to take up position in the hole. The change though giving more stability to the attack, seemed to do no damage to Brazil’s intentions. Antonio continued to occupy a forward position, freeing up Wesley.

The Flamengo full-back swept into space before playing a trick-move over Cristian Moreira’s head and seemed on course to finish his own move but tumbled and fell. Even as the Honduran defence went up with claims of hand ball off Wesley, Brenner spotted the loose ball and hammered it into the roof of the net.