The Bengaluru FC defender scores on set piece to erase memories of conceding on set pieces in their maiden ISL final last year. 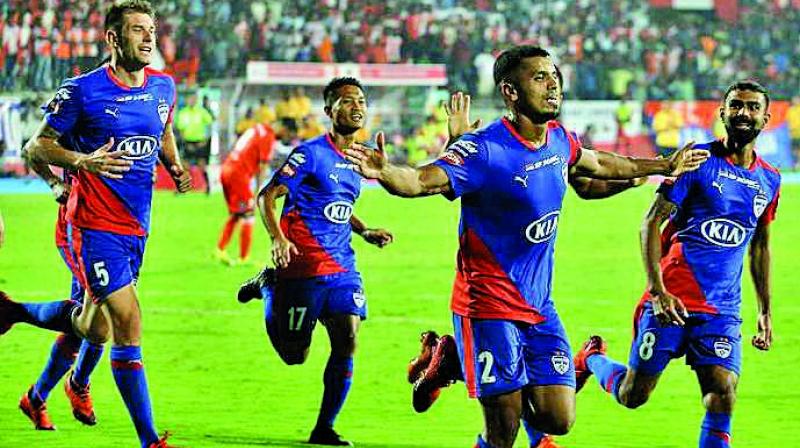 Prior to the final, Dimas Delgado talked about how Bengaluru FC wanted to win the Indian Super League title badly after losing to Chennaiyin FC in the final last season. The Blues key midfielder suffered a knee injury towards the end of the first half in the final and could only watch his team losing its grip on the title from the stands in the second half.

This season Dimas played a crucial role for Bengaluru in the midfield like last year and lasted full 120 minutes in the final against FC Goa on Sunday. His team found an unlikely hero in local boy Rahul Bheke who broke the goal deadlock after 116 minutes of play at Mumbai Football Arena. As both teams were getting set for the shootouts after playing out hard fought goalless game in regular 90 minutes and were approaching to the end of 30 minutes extra time, Bengaluru won a flag kick. Dimas went to take the kick and his aerial curling ball found Bheke perfectly placed to head towards the far corner. FC Goa goalkeeper Naveen Kumar had made some excellent saves especially from striker Miku’s foot and head but he could manage just fingertips as ball, agonisingly for him, hit the inner side of upright to sail in the net. Bheke alongwith his teammates broke into celebrations running straight to travelling West Block Blues fans as they won the match by 1-0. It turned out to be golden goal and the jubilation doubled after referee blew the final whistle and Bengaluru led by talismanic Sunil Chhetri lifted their maiden ISL title. This was sixth title for the franchise in as many years and they will now represent India in the AFC Cup.

It reminded fans of Mohammad Rafique’s 90th minute goal against Kerala Blasters that helped ATK to win the title in the inaugural ISL final in 2014. It was the last time city had hosted the ISL final at DY Patil Stadium in Nerul.

Bheke had already couple of goals and an assist to his name in this campaign besides being solid in the back line. But his performance at the front on Sunday was what counted the most especially after he had been on the receiving end in the last season’s final. Bheke and his team-mates had indulged in poor defending as Chennaiyin punished them with two goals on set pieces to eventually win the final 3-2 and lift the trophy for second time.

But Bheke and Co were vigilant at the back this time around and hardly gave Goa’s prolific striker Ferran Corominas (Coro) any chance to have a go at goal. Coro won the golden boot award for scoring most 16 goals but he and his fellow forwards where kept quiet on Sunday by Bheke and his team-mates.

“It is a great feeling to score in final minutes. It is the most memorable goal for me. Our team played well as a unit and it the sweetest and best ever win for me,” he said to the presentaters during the post match ceremony on Sunday night.

The success will be sweet for the Mumbai defender who started from Mahindra United Youth Academy and played professional football for the first time for Air India. But Air India couldn’t play I-League for not meeting AFC norms and Bheke played for newly floated club Mumbai Tigers before returning to I-League with Mumbai FC. He went on to play for Kolkata giants East Bengal before joining ISL team’s Kerala Blasters and FC Pune City on loan. In 2017, he joined Bengaluru FC and has played two finals in ISL.