Barcelona keeper Ter Stegen stakes claim to be Germany's No. 1

Ter Stegen's next chance to impress Low will be Germany's friendly against Argentina on October 9 in Dortmund. 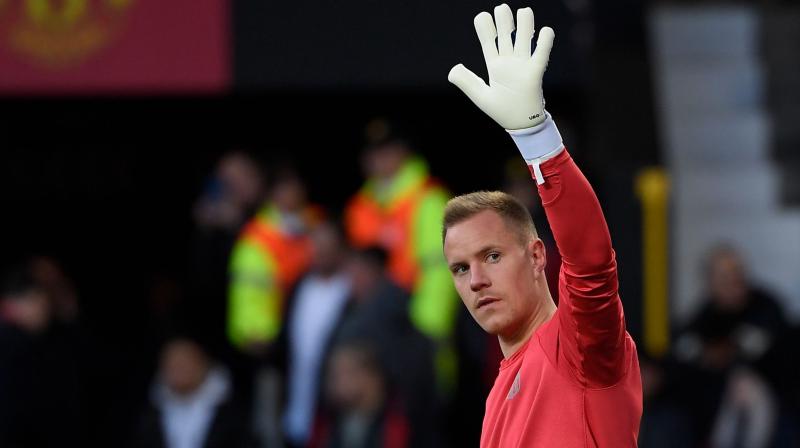 The Barcelona goalkeeper produced a player-of-the-match performance to help the Spanish team escape with a 0-0 draw at Borussia Dortmund in their Champions League group opener on Tuesday. (Photo: AFP)

Dortmund: Whether Germany coach Joachim Low was watching or not, Marc-Andre ter Stegen delivered his message.

The Barcelona goalkeeper produced a player-of-the-match performance to help the Spanish team escape with a 0-0 draw at Borussia Dortmund in their Champions League group opener on Tuesday.

It was Ter Stegen's first game since he voiced discontent with his backup role to Germany No. 1 Manuel Neuer.

Ter Stegen saved a penalty from former Borussia Monchengladbach teammate Marco Reus and made a string of saves to deny the home side.

Ter Stegen was already known for his prowess facing penalties before he left Gladbach for Barca in 2014. His save against Reus - diving to his left, then calmly snapping up the rebound on the line before any of the onrushing Dortmund players could reach the ball - was his fourth from six penalties he has faced in the Champions League.

"People know what I'm capable of. I just want to concentrate on my work and show my capabilities to 100%. I think I managed that today," Ter Stegen said.

Ter Stegen, undisputed No. 1 at Barcelona, is finding it much harder to break through for Germany. The 27-year-old goalkeeper expressed disappointment with his reserve role after last week's European qualifiers against the Netherlands and Northern Ireland.

The 33-year-old Neuer, who is also Germany's captain, kept his place between the posts to leave Ter Stegen on the bench, as he has been for every competitive international game since October 2017.

"It's not easy to find an explanation for it. I give my best in every game to make the decision more difficult," Ter Stegen said. "These international games were a tough blow for me."

Bayern Munich goalkeeper Neuer showed little sympathy after his team's 1-1 draw at Leipzig in the German league on Saturday.

"He never said anything about it when we were on international duty. Basically I think that we should always appear as a team, and I don't know if this helps," Neuer said. "I'm a team player and always think of what's best for the team."

Neuer referred to the duel between Germany goalkeepers Jens Lehmann and long-time No. 1 Oliver Kahn before the 2006 World Cup, and the praise Kahn paid his rival for a brilliant performance in the quarterfinal win over Argentina.

Ter Stegen hit back at the notion he wasn't a team player.

"If you think of the past years, you can see how I've carried myself. So these comments are not appropriate," the German said.

Ter Stegen's next chance to impress Low will be Germany's friendly against Argentina on October 9 in Dortmund.