Gabriel Jesus seemed to scored a winning goal for his team but VAR played spoilsport and denied it due a Laporte handball in the build-up. 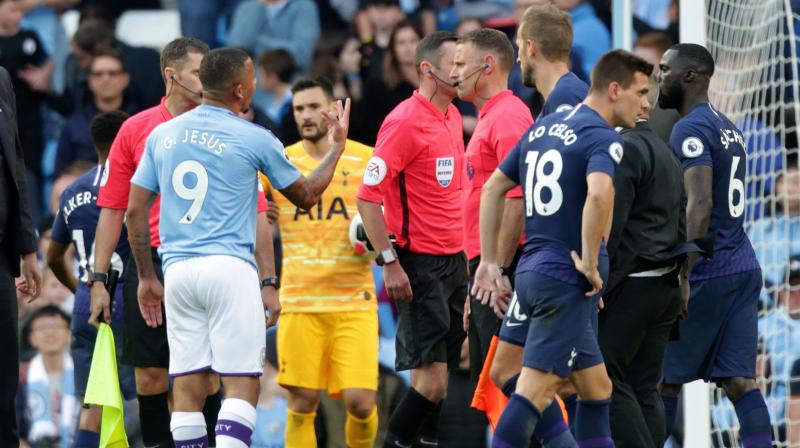 The match was an action-packed one as both teams played an aggressive brand of football. (Photo: AFP)

Manchester: Manchester City and Tottenham Hotspur played out a 2-2 draw at the Etihad Stadium in the ongoing Premier League on Saturday.

The match was an action-packed one as both teams played an aggressive brand of football.

Manchester City dominated the bulk of ball possession, and their dominance paid a dividend as Raheem Sterling scored the first goal for the team in the 20th minute of the match, giving City a 1-0 lead.

Soon after, Tottenham struck back with an equaliser as Erik Lamela registered the goal in the 23rd minute, bringing the scoreline to 1-1.

Sergio Aguero scored the second goal for Manchester City in the 35th minute, giving the side a 2-1 lead. No more goals were possible in the first half and the scoreline remained in favour of City.

In the second half, Tottenham came out all guns blazing and Lucas Moura struck a thunderous goal in the 56th minute, bringing the scoreline to 2-2.

Both teams continued to play in an aggressive manner. In the dying minutes of the match, Gabriel Jesus seemed to have a registered a goal for the team, but his goal was disallowed by Video Assistant Referee (VAR) due to handball.

In the end, both teams had to settle with a draw.

Manchester City will take on Bournemouth whereas Tottenham will face Newcastle on August 25.