The trophy, an artistic red goblet, is sponsored by Budweiser. Islam prohibits the consumption of alcohol. 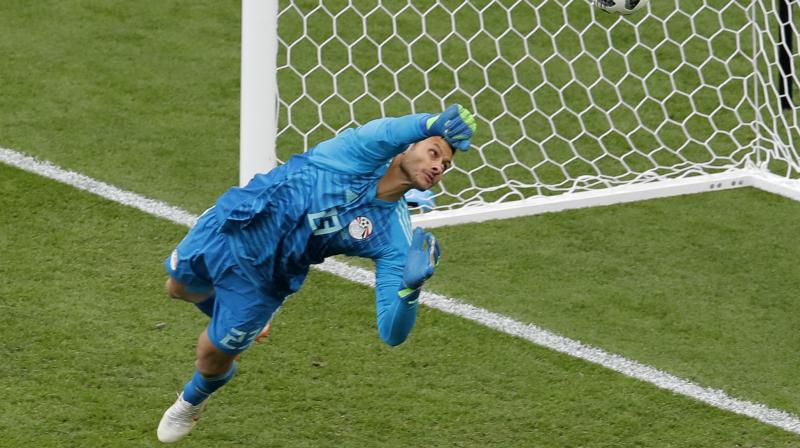 The 29-year-old Elshenawy won the award following his impressive performance in the 1-0 loss to Uruguay on Friday.

St. Petersburg (Russia): An Egypt team official has confirmed goalkeeper Mohamed Elshenawy declined to receive a player of the match trophy at the World Cup for religious reasons.

The trophy, an artistic red goblet, is sponsored by Budweiser. Islam prohibits the consumption of alcohol.

Egypt team director Ihab Leheta told The Associated Press on Sunday that Elshenawy said a "few words" and posed for photos in a brief ceremony, but didn't take the goblet.

He said there was no policy or set of regulations for members of the all-Muslim squad regarding their dealings with sponsors or prizes linked to alcohol.

The 29-year-old Elshenawy won the award following his impressive performance in the 1-0 loss to Uruguay on Friday. He made a string of stunning saves before Uruguay clinched the win with a goal in the 89th minute.

Images of Elshenawy gesturing what appears to be a rejection of the trophy held by a young Budweiser representative in the stadium's tunnel appeared on social and mainstream media. Budweiser is among FIFA's top sponsors.

.@FIFAcom have a deal with @Budweiser for the #ManoftheMatch award. Being alcohol, there are 3 North African nations + Saudi & Iran in the @FIFAWorldCup. Did they not think these guys won’t accept the award? #EGY⁠ ⁠’s @Melshenawy did not take his today. pic.twitter.com/750OOyFaw0

Egypt, a mainly Muslim nation of some 100 million, is playing at the World Cup for the first time since 1990.