Netherlands booked their place at Euro 2020 as despite a missed penalty from Steven Davis in Saturday's 0-0 tie versus Northern Ireland. 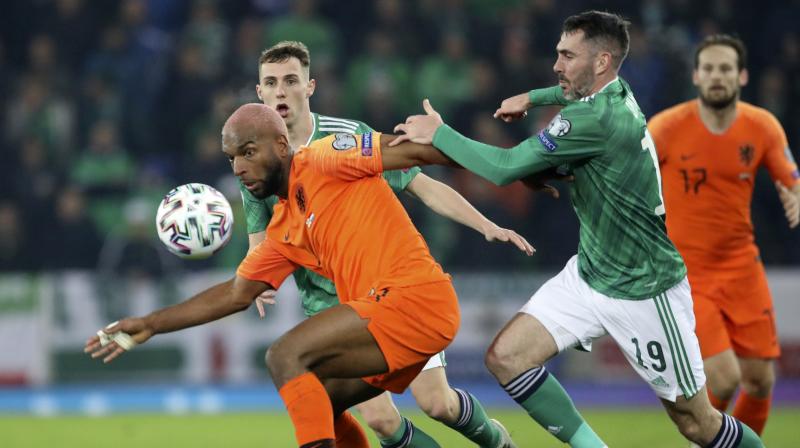 Ryan Babel forced two good saves from Bailey Peacock-Farrell either side of a Promes curler that flashed narrowly wide. Northern Ireland were gifted a golden opportunity to take the lead after 30 minutes when Joel Veltman was ruled to have handled McNair's cross in the area under pressure from George Saville. (Photo:AP)

Belfast: The Netherlands booked their place at Euro 2020 as they survived a missed penalty from Steven Davis in Saturday's 0-0 draw against Northern Ireland. Ronald Koeman's side arrived at Windsor Park knowing one point would be enough to ensure they qualified from Group C.

They achieved that goal thanks to a stroke of luck when Northern Ireland captain Davis blasted his first-half penalty high over the bar. The Netherlands had failed to qualify for the Euro 2016 and the 2018 World Cup, so this was a cathartic moment for a country with such a rich football heritage.

They sit second in the group, two points behind leaders Germany with one match left. Netherlands captain Virgil van Dijk admitted Davis's penalty miss was the key moment. "It was a tough game. Unlucky for him, good for us! The lads are very happy in the dressing room. We're back at a major tournament," he said.

Whether the current crop, headlined by Frenkie de Jong and Matthijs de Ligt, are good enough to emulate the Netherlands side that won the 1988 European Championship thanks to the brilliance of Ruud Gullit and Marco van Basten is another matter. This was at least a step in the right direction for an emerging young team that lost to Portugal in the Nations League final in June.

"It means a lot for us as players. Hopefully it means so much to the Dutch people," Liverpool defender Van Dijk added. "We have to make sure we prepare very well for a big tournament. We missed the last two. We want to perform well,” Van Dijk said.

Third-placed Northern Ireland cannot qualify via the group stage now, but they are assured of a place in the play-offs in March. It was a frustrating night for Northern Ireland manager Michael O'Neill, in what could be his last home game in charge after he was appointed Stoke boss recently.

O'Neill, who will manage both Stoke and his country until after the play-offs, had hoped for revenge over Koeman after he branded Northern Ireland's tactics "terrible" and "outrageous to watch" following the Netherlands' 3-1 victory in October.

This time, Koeman was without injured Lyon forward Memphis Depay and ill Liverpool midfielder Georginio Wijnaldum and they almost fell behind in the opening moments when keeper Jasper Cillessen took too long to clear.

Although Corry Evans blocked the ball, it didn't land in time to slot into the empty net and the Dutch averted the danger. Josh Magennis headed just wide from Paddy McNair's cross and Jonny Evans couldn't keep his header on target as Northern Ireland piled on the pressure.

Despite their early struggles at the back, Steven Berghuis was inches away from putting the Netherlands in front when he met Quincy Promes' pass with a close-range shot that looped onto the crossbar. Finding their rhythm, the visitors threatened and created a series of chances in quick succession.

Ryan Babel forced two good saves from Bailey Peacock-Farrell either side of a Promes curler that flashed narrowly wide. Northern Ireland were gifted a golden opportunity to take the lead after 30 minutes when Joel Veltman was ruled to have handled McNair's cross in the area under pressure from George Saville.

Making his 116th appearance as he became the United Kingdom's most capped midfielder, Davis had the chance for a night to remember when he stepped up to take the penalty. But, after a lengthy protest from Cillessen, the Rangers star blazed his spot-kick into the stands.