USA planned to soak up the pressure and hit on the counter, aware of their opponents’ defensive infirmities. 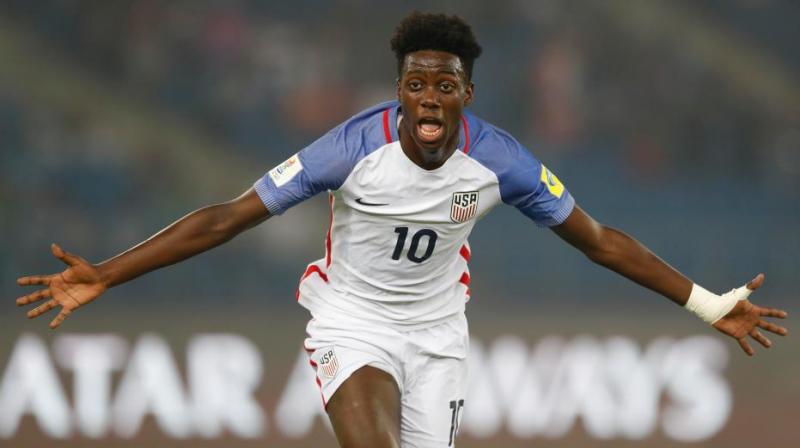 New Delhi: Tim Weah showed he is a chip off the old block, his hat-trick facilitating USA’s march into the Under-17 World Cup quarter-finals in a 5-0 demolition of Paraguay here on Monday.

Son of Liberia legend George Weah, the forward did justice to his famous surname, stabbing home from close range in the 19th minute, bending the ball to the top right corner in the 53rd and completing his hat-trick with a routine effort in the 77th. Andrew Carleton (63rd) and Josh Sargent (74th) were the other scorers.

USA coach John Hackworth knew the offensive-minded Parag-uayans would come at them hard.

Action commenced at brisk pace with the flamboyant South Americans trying to see both their flanks to trouble the American defence.

USA planned to soak up the pressure and hit on the counter, aware of their opponents’ defensive infirmities. Their scheming bore fruit when an unmarked Weah stretched to direct right winger Ayo Akinola’s cross in, finishing off a smooth move.

The Paraguayans, with 10 goals in the group stage, didn’t require a second invitation to attack, the goal only spurring them on. They went about their task in a composed manner, rolling the ball around, keeping it on the ground, stretching the play towards the two wings, displaying their technically superiority over the Americans.

The second session also began in the same vein but dramatically changed complexion after Weah’s individually-crafted second. The forward received the ball on the edge of the box and then quickly cut inside, to direct the ball over the Paraguay goalkeeper into the far corner.

Paraguay’s defence disintegrated at this moment, allowing USA to extend their dominance through Carleton and Sargent, Weah having the last word with his third strike.