Fifa U-17 World Cup: Germany too hot for Colombia

The goal put Arp second on the golden boot list, level on four goals with Japan’s Keito Nakamura and one behind France’s Amine Gouiri. 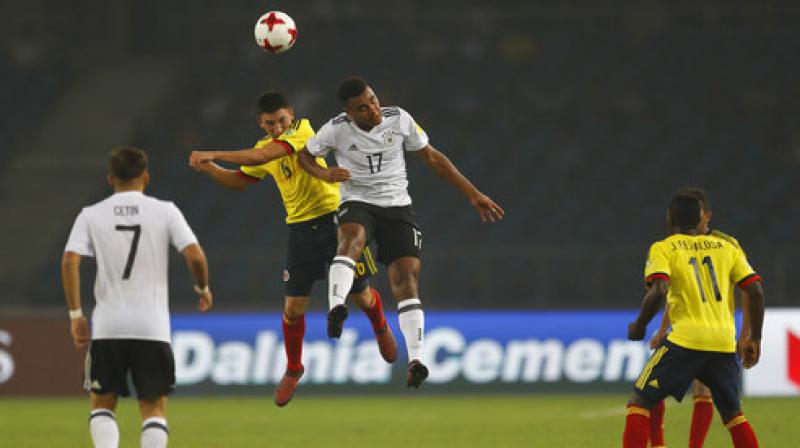 Germany’s Maurice Malone (right) and Colombia’s Fabian Angel in action in their Fifa Under-17 World Cup round of 16 match in New Delhi on Monday. Germany won 4-0. (Photo: AP)

Qualifying with a negative goal difference into the last 16 (scored five, conceded six, including a 0-4 hammering by Iran); the senior world champions were under pressure to perform against Colombia.

But once Arp settled nerves with an opportunistic seventh minute strike, there was no stopping Germany. Their disciplined approach proved too much for the skillful but disorganised Colomb-ians, as they let in goals in the 39th (Yann Bisseck), 49th (John Yeboah), and 65th (Arp’s second ).

Colombia got an early sight of goal through Deiber Caicedo’s fourth minute move. That was as far they would go.

Germany went ahead through their in-form attacker Arp, who capitalised on a goalkeeping error for his third goal of the tournament.

Kevin Mier rushed off his line to close down Arp inside the box but spilled the ball allowing the Hamburger SV forward to spin sharply and direct his left footer into goal from an acute angle.

Action swung back and forth even as the Germans worked the channel between Colombia’s left full back and stopper.

Germany were sharper in front of goal and asked several questions of a fumbling Mier, who first made a hash of a clearance, and then was saved by the cross bar in the 34th minute after being beaten flat a swinging left footer by the impressive John Yeboah.

The Germans consolidated their supremacy on 39 minutes. Defender Yann Bisseck went up the field, utilising his formidable frame to head in a corner.

Germany created two more opportunities before the half time whistle and resumed after the break in like vein, Yeboah effectively putting the game to bed with a simple finish.

The South Americans paid for pushing up the field as an overhead ball caught them napping, Dennis Jastrzembski set up Yeboah for the goal.

Colombia coach Ernesto Restrepo introduced Fabian Angel to shore up their midfield. He only managed to commit cynical fouls, unable to stem the flow of German attacks.

The third goal demoralised the Colombians, who were caught flat footed again by an alert Arp five minutes past the hour mark, scooping over a hapless Mier after snatching the ball from the feet of defender Guillermo Tegue.

The goal put Arp second on the golden boot list, level on four goals with Japan’s Keito Nakamura and one behind France’s Amine Gouiri.

Colombia’s embarrassment cold have bigger, had not for a couple of diving saves from Mier, who was left to fend for himself.

Arp was called to the bench by coach Christian Wueck to keep him fresh for a potential quarter-final face-off with Brazil in Kolkata on October 22.