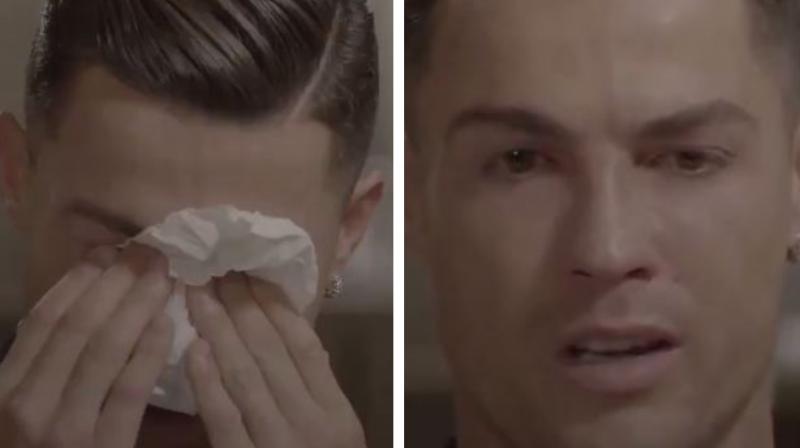 During a particular segment, Cristiano Ronaldo was shown a video of his late father, Jose Dinis Aveiro, talking about the pride he felt for his son. (Photo: Twitter/Screengrab)

Mumbai: Cristiano Ronaldo appeared as a guest recently on English broadcaster Piers Morgan’s talk-show ‘Good Morning Britain’. On the show, he talked about his father, about the rape accusations on him, and life with his girlfriend Georgina Rodriguez.

During a particular segment, he was shown a video of his late father, Jose Dinis Aveiro, talking about the pride he felt for his son. Aveiro expired due to liver failure at the age of 52 when Ronaldo was just 20 years old and playing at Manchester United.

Upon seeing the video, he could not control his emotions and started crying. While in tears he said, “I never saw the video. Sorry.”

When asked about the reason for his reaction, he said, “To be the number one and he doesn’t see anything. He doesn’t see me receive awards. Never. My family saw, my mum, my brothers and even my older son. But my father, he didn’t see nothing.”

‘He doesn’t see me receive awards.’

In an emotional interview, @Cristiano breaks down in tears over the loss of his late father and the fact that he never got to witness his son's success.

Watch the full interview on @ITV on Tuesday at 9pm.@piersmorgan | #GMB pic.twitter.com/LybbJn31VR

He later said, “I think the interview would be funny, but I didn’t expect to cry. But I never saw these images. I don’t know where you… I have to have these images to show my family.”

“But I really don’t know my father 100 per cent. He was a drunk person. I never spoke with him, like a normal conversation. It was hard.”

Ronaldo also talked about his girlfriend, Georgina Rodriguez, and revealed plans to marry her one day. He said, “We’ll be [married] one day, for sure. It’s my mum’s dream as well. So, one day. Why not?”

Football star @Cristiano opens up about life with his girlfriend Georgina Rodriguez. ❤️

Ronaldo’s father’s early demise meant that he was not able to watch his son’s mercurial rise in one of the greatest footballers in the world and his incredible achievements for Manchester United, Real Madrid, Juventus and his national team, Portugal.